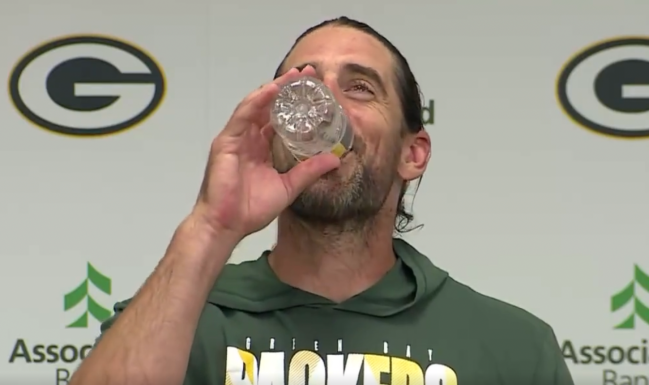 If you’re still unclear why Aaron Rodgers put the Packers on ice all offseason while he drank from a coconut with Miles Teller on a tropical island, allow the following to serve as a microcosm:

Aaron Rodgers, Sept. 3, 2020: “Jake Kumerow has been such a solid performer for us the last couple of years. I love his reliability. I think he’s a fantastic, steady player who’s very heady on and off the field…He makes plays, he plays with a lot of confidence and he’s a guy you love having on the squad.”

Despite Rodgers’ very public criticism of his organization failing time-after-time to heed his advice, the 37-year-old is back for his 17th year under center in Green Bay.

ESPN‘s Packers beat reporter Rob Demovsky made the courageous decision to joke about the thorny QB’s biggest insecurity with the team, directly to his face.

“Our tight end, Bronson Kaufusi, I love him. One of the happiest guys ever.”

When Rodgers praised Jake Kumerow last year, the Packers cut him and he’s now on the Bills.@RobDemovsky: “I can’t wait to see what Kaufusi does in Buffalo this year.”

“I can’t wait to see what Kaufusi does in Buffalo this year.”

I haven’t seen Rodgers chuckle this emphatically since he outed himself for not knowing the All-Decade tight end LaVern Dilweg, who helped the Packers secure NFL championships in 1929, ’30, and ’31. Duh.

"What was the key to distributing your packer city lightning to all of your buttonmen like all-decade torpedo LaVern Dilweg?"