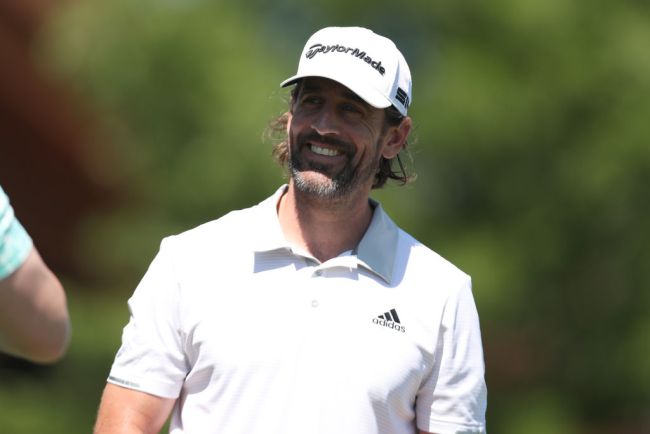 Aaron Rodgers was essentially in hiding during the NFL offseason as rumors swirled that he may possibly retire from the game due to his displeasure with the Green Bay Packers. The first real glimpse we got of Rodgers this summer was during The Match when he and Bryson DeChambeau took on Tom Brady and Phil Mickelson. It was clear that Rodgers hadn’t just been sitting around not working out during the offseason, he was gearing up for a return, and his gigantic calves gave that away.

Rodgers knew that he had to up his calve game with Mickelson around, so that’s exactly what he did.

The Packers QB joined ‘The Pat McAfee Show’ and shared that he had been on a similar offseason workout plan he had been on in the past, but once The Match was officially set up, he upped his calve workouts to try and get on Mickelson’s level.

“I wasn’t attempting to mislead anybody, but I was on a similar workout that I’ve been on,” Rodgers explained. “I probably upped the calves workout just a tad because I knew I was going against Phil. I just didn’t want to give Phil any extra ammo. He’s a below-average trash-talker as was his partner, really as was my partner as well.”

Were you just sandbagging everybody all summer @AaronRodgers12?

"Yeahhh I wasn't attempting to mislead anybody but I was on a similar workout that I've been on. I probably upped the calves workout just a tad because I knew I was going against @PhilMickelson" #PatMcAfeeShowLIVE pic.twitter.com/sv5z18RAbg

Hate on Rodgers all you want, but the man can deliver some trash-talk. Not only did he take a dig at Mickelson and Brady’s trash-talking abilities, but even threw DeChambeau under the bus for being a bad trash-talker as well.

Rodgers and DeChambeau ultimately got the last laugh in The Match as they beat Brady and Mickelson 4&3 on the 16th hole.