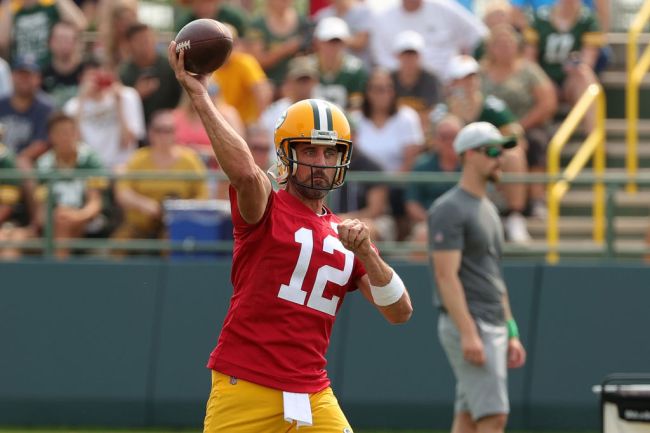 Aaron Rodgers is SO back. The 37-year-old quarterback arrived in Green Bay last week and was immediately gifted with an Aston Martin golf cart and took it for a joy ride.

There has been a lot of debate around whether he would return to the Packers for 2021 and whether he can still perform at an MVP level. Although it’s just one throw, he proved the doubters wrong at the end of practice on Thursday.

Quarterbacks often try some trick passes at the end of the day. Even though they’re some of the most elite athletes in the world, it’s even difficult for them.

Rodgers, however, absolutely sunk his attempt. He set up somewhere between the 30 and 35-yard-line before throwing at a net in the back of the end zone.

The net was a circular target with a radius no greater than three feet. He was tossing it from about 40 or 45 yards.

Rodgers has dropped some dimes in the past and there is no denying his elite arm and accuracy. This throw in particular was next level.

It only gets better with each angle.

MVP throw by the MVP!

Another angle of the 🎯 from @AaronRodgers12 👀 pic.twitter.com/9vsxuCte5r

Rodgers tipped his hat to the crowd after draining the shot.

If there was any doubt whether AR12 is back or not, there is not anymore.