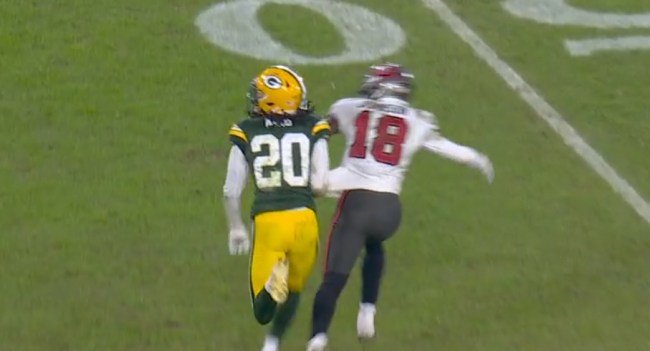 In the final series of the game, the Bucs were able to get a game-clinching first down after a pass interference call went against Packers defensive back Kevin King for holding Tyler Johnson’s jersey.

Pretty hard to complain about the Kevin King PI call when you see it like this. pic.twitter.com/VqF4wUvuyA

While speaking to the media after the game, Rodgers blasted the refs and said he didn’t think the pass interference penalty was a good call because he felt that officials hadn’t thrown the flag on a similar play against the Bucs earlier in the game. Rodgers went on to argue that the pass thrown by Brady wasn’t catchable which would have negated the pass interference call.

Aaron Rodgers on pass interference "I think it was a bad call" pic.twitter.com/8FTd36C5dY

I think it was a bad call,” “I think there were a few opportunities for some plays down the field for us that weren’t called. Just surprised that call in that situation was made. You know we get the ball back with probably 1:35 and a timeout with a chance to win the game and go to the Super Bowl. It didn’t look like it was even catchable. So, yeah, that was a bad call.”

It’s hard to argue against the pass interference call when it was pretty clear King held Johnson on the play.