Aaron Rodgers Offers Up Hilarious Assessment Of His Play, Seems To Blame Teammate’s For Packers’ Struggles 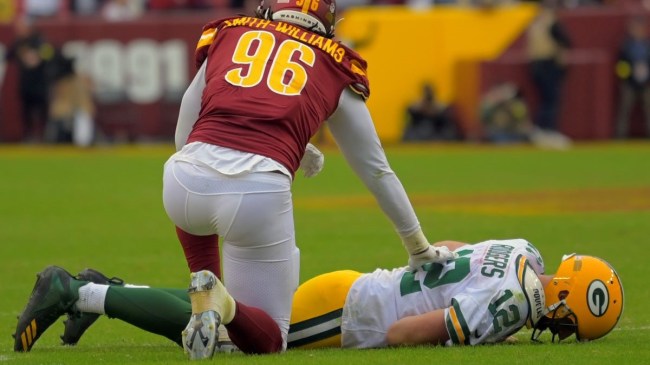 The Green Bay Packers have not been very good in 2022. In fact, some might even say the Packers have been pretty bad thus far this season. Awful, even.

Green Bay currently sits at 3-4 on the years and just suffered an embarrassing loss to the Washington Commanders and backup quarterback Taylor Heinicke.

Somehow, despite boasting four-time NFL MVP and two-time reigning NFL MVP Aaron Rodgers, the Packers have one of the league’s worst offenses. Their 18.3 points per game rank 23rd in the entire NFL.

And it’s not solely a product of the run game, either.

Green Bay’s 221.3 pass yards per game place them 18th in the league. Again, this is with Aaron Rodgers at quarterback. Now, sure, you may say “but Clay, they traded away one of the best wide receivers in the league!”

To that I say, excuses are a lack of faith in your own confidence. Rodgers isn’t making excuses, though. Not because he’s owning the Packers’ poor offensive output. Of course not. But instead, because he doesn’t think he’s playing poorly. So what’s there to fix?

Rodgers’ numbers in the 23-21 loss to the Commanders weren’t bad. But they weren’t exactly anything to write home about, either. The star signal-caller went 23-of-35 for 194 yards and two touchdowns. Solid numbers for a game manager. But far from the standard for a guy making what Rodgers is making.

But when Pat McAfee asked Rodgers about his and his team’s struggles, the quarterback didn’t seem interested in taking much blame.

Asked by @PatMcAfeeShow about his own performace, Rodgers said that QB coach Tom Clements gave Rodgers his highest single-game grade yet this season in Sunday's loss against the Commanders.

Rodgers also suggests that players who are making mental mistakes shouldn’t be playing as much.

Look, Rodgers ain’t getting benched anytime should. And it’s ridiculous to even suggest that he could or should. But it’s pretty funny to watch him point the finger literally everywhere else but back at himself.

Hard to imagine that goes over too well in the locker room. But hey, maybe he’s just saving all the self-reflection for the offseason.