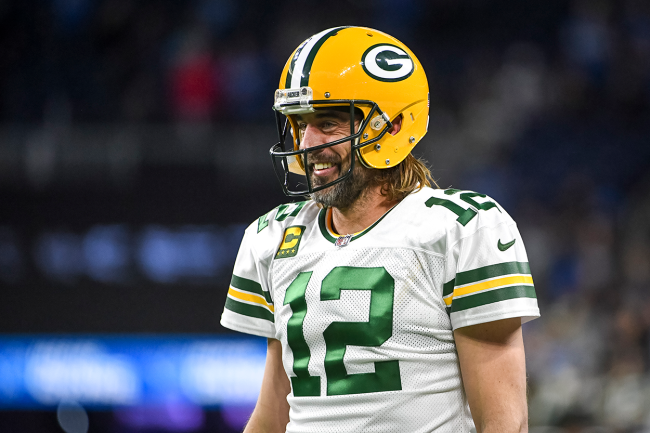 Aaron Rodgers’ future in the NFL is up in the air. The 38-year-old, reigning MVP is contemplating whether to retire, stay in Green Bay, or request a trade.

All signs point to Rodgers returning to the Packers in 2022. He has one year left on his contract and may choose to play it out, or sign an extension that would keep him in Wisconsin until he decides to hang it up.

However, according to Pro Football Talk, he has alternative plans lined up. Rodgers reportedly has specific trades in place that would be ready to go should he choose to move in that direction.

Per the report, the potential moves have already been arranged and only the paperwork would need to be filed if that is what ends up happening. The ball is in Rodgers’ court.

Of the potential destinations, the shortlist is reportedly down to four. Green Bay, of course, is one and the other three teams are in the AFC — Denver, Tennessee and Pittsburgh.

Should Rodgers choose to play for the Titans, Broncos or Steelers, things are set to move quickly. The trades are said to be agreed upon already and the terms of potential contracts for the NFL’s best quarterback are already established.

The final move comes down to what Rodgers decides to do.

Just under a month ago, AR12 said that he was going to take a few weeks to think about things. From there, a decision would come pretty quickly.

The “few weeks” point has been met and the clock continues to tick. Only time will tell what is set to unfold with Rodgers, the Packers and either the Titans, Steelers or Broncos.