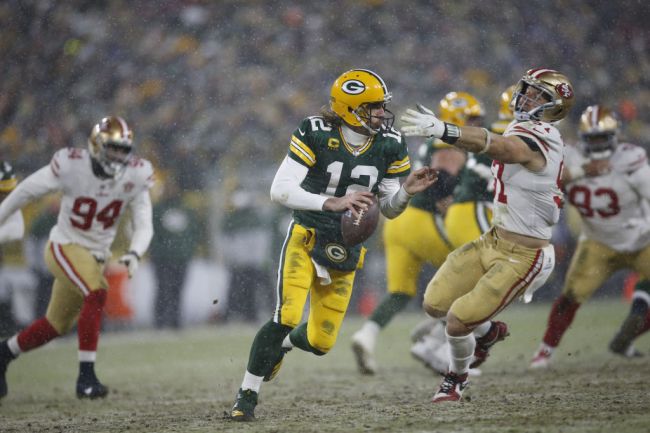 While there were plenty of important storylines to come from round 1 of the NFL Draft last night, perhaps the most interesting is the Green Bay Packers once again failing to get Aaron Rodgers help in the draft.

It extended the Packers run of having never drafted a 1st round receiver during Rodgers’ career and continued a pattern where they repeatedly refuse to spend early draft picks to make life easier for the face of their franchise. In fact, Davante Adams is the only receiver they’ve taken in the first 2 rounds in more than a decade.

The Packers entered this draft with a clear need at receiver and just about everybody in the football world was expecting them to finally draft a receiver in round 1 this year. Then 6 receivers were taken in the first 18 picks and they instead went with a pair of defensive players.

Now it is being reported that there was one receiver in particular that Rodgers was interested in and the Packers weren’t that far off from being able to land him. According to NFL insider Ian Rapoport, the receiver Rodgers wanted was Treylon Burks, who was selected 4 spots ahead of the Packers by the Titans.

"The word I got was that Treylon Burks was the guy Aaron Rodgers wanted & he went early to Tennessee" ~@RapSheet#PMSLive pic.twitter.com/hTGOGYJe9H

Now we head into day 2 of the draft with the Packers currently scheduled to have to wait until the 21st pick of the day to select again. Their depth chart currently has Sammy Watkins and Randall Cobb as their top options at wide receiver.

After watching all of these other teams go out and make moves to get the players they felt they needed, you have to wonder how the Packers didn’t go ahead and make a move to make sure they got Burks.

The Detroit Lions moved up 20 picks to get the receiver they wanted yesterday and all they had to do was move back 12 spots at the beginning of round 2 and give up a late second rounder. What could it have cost the Packers to move from 22 to 17 to beat the Titans to Burks?

After all of these years of not helping your quarterback, wouldn’t you think they’d be motivated to get this done after they traded away his favorite target?

Now, they will instead have to settle for whoever falls to them at pick 53 or 59 will be good enough to give Rodgers a target he can rely on. Otherwise, next season could be a disappointing one for the Packers offense.