Aaron Rodgers Explains Why He Likes Beating Chicago So Much: Bears Fans React 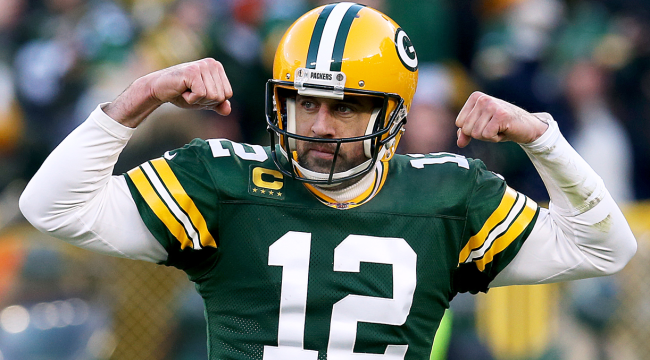 As if Chicago Bears fans needed a reason to despise the Packers, their quarterback Aaron Rodgers has given them even more motivation to loathe Green Bay over the years.

The Bears and Packers, two of the oldest franchises in the NFL, have faced off 204 times (including 2 postseason games) since their first game in 1921.

And while the rivalry itself is remarkably even – Green Bay leads the series 103 to 95 with six ties – Rodgers, as the Packers starting QB, is 23-5 versus Chicago.

That fact is something that Rodgers has made very apparent that he enjoys.

Last season, after yet another Packers win over the Bears, Rodgers told the Chicago crowd, filled with fans flipping him off, that he “owns” them.

While most people, including Tom Brady, loved what Rodgers did, many in Chicago, including Bears Hall of Famer Dick Butkus, did not.

He was asked that question this week on an episode of Pardon My Take.

“Yes, because it’s a great sports town,” Rodgers replied. “If we’re beating up on a town that doesn’t have a great sports history, it’s just another win. Chicago is Chicago. You’ve got 100 years of Bears football almost, right? You have the Chicago Bulls, I grew up a Bulls fan.

“Back on my old TV, when w had seven dials, you had to hit it just right with the antenna, and we could get WGN so we could watch Cubs baseball and Harry Caray, that was iconic, and Bulls basketball. I grew up watching Chicago sports.”

Confirmed @AaronRodgers12 wishes he was a Bear. Can’t blame the guy!

That's BS.....I'm not believing one damn thing outta his mouth... and I'm sure Packers fans don't believe that either.

He's lying, anyone believing that garbage is an idiot.#BearsCamp

This man is me. I too have come to grips that the @ChicagoBears are a bum franchise. Nonetheless, my hatred for @AaronRodgers12 and the @packers run deep! Rooting against them is how I get through the playoffs. #sadbuttrue https://t.co/M9kwJ86I9l

.@vikings fans ur just another win

For the record, Rodgers has the most wins of any quarterback in the century long history of the Bears. He has also thrown 61 career touchdowns against the Bears, most of any QB. And he also owns the single game record vs. the Bears, throwing six in a game in 2014.

No wonder they hate him so much.