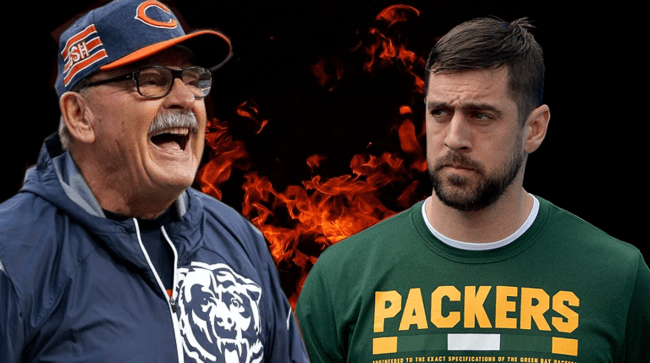 Butkus was recently verified on Twitter and ever since has been on quite a roll, tweeting up a storm and putting everyone he has an issue with in his sights.

Aaron Rodgers, however, is by far the NFL legend’s favorite victim.

Butkus, who really started going hard at Rodgers after he told Bears fans that he owns them after a win at Soldier Field in October, has even gone after the quarterback for his mysterious relationship with actress Shailene Woodley.

When reports began to spread that Rodgers and Woodley, who had been engaged to be married, had broken up, it was Butkus who had fans breaking up with his reaction to the news.

Dick out of nowhere becoming the best twitter around

So there was no way Dick Butkus was going to let Aaron Rodgers post a cryptic message on Instagram thanking a bunch of people in his life on Monday night without commenting.

In his post, Rodgers thanked everyone from Shailene Woodley to his teammates – specifically all of the quarterbacks on the Packers to his “Friday Crew” of Randall Cobb and his wife Aiyda, tackle David Bakhtiari and some interior designer.

The one person Aaron Rodgers left off his list, of course, was Dick Butkus, which did not go unnoticed by the veteran of the gridiron.

Once again, Dick Butkus, of all people, is winning Twitter.

the Twitter world is so much better with you here #monstersofthemidway

OK. That's it. I've seen too many tweets from you pop into my timeline that made me laugh. "follow"