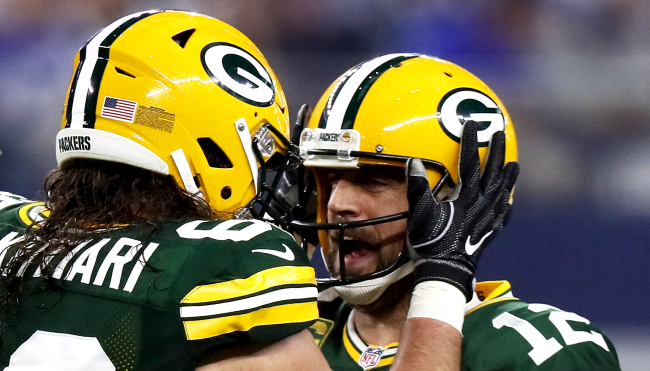 Green Bay offensive tackle David Bakhtiari has been playing with Aaron Rodgers ever since being drafted by the Packers in the fourth round in 2013.

He has been protecting Rodgers’ blind side since becoming the first Packers rookie to start every game at left tackle that year.

We have seen him driving around Green Bay with Rodgers in the bed of his pickup truck and chugging beers alongside him at Milwaukee Bucks games.

Bakhtiari also isn’t afraid to have a little fun or mess with his long time friend a little bit when he sees fit. (He does wear number 69, after all. Nice.)

So, when David Bakhtiari got up this morning and saw the message his pal Aaron Rodgers had posted to social media Monday night thanking his teammates and his ex-girlfriend Shailene Woodley, he, like everyone else, had some sort of reaction.

The difference is, his reaction to Rodgers’ message, in which he gives thanks to his “Friday Crew” which includes Bakhtiari, was perhaps the best one of all.

“To the Friday Crew, @aiydacobb, @rcobb18, @frankieshebby, and @davidbakhtiari,” Rodgers wrote. “I loved every moment we got to spend together this year. Your love and support was overwhelming, and I cherish the friendships I have with each of you.

“To my teammates, past and current, you are the icing on the beautiful cake we call our job; football. the friendships that we have will transcend our collective time in this game and I am so thankful for the role that each of you have played in making my life that much better.”

Yep. That pretty much hits the nail squarely on the head this Tuesday morning.