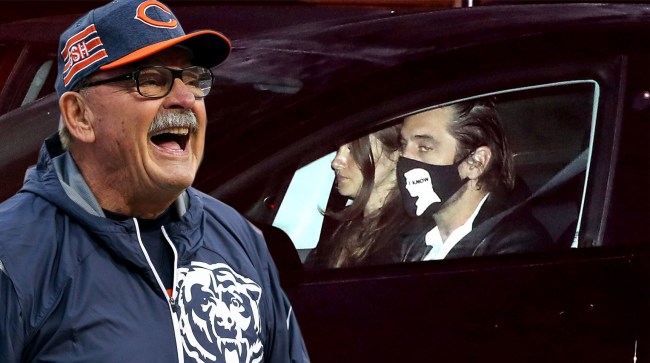 In case you missed it, Green Bay Packers quarterback Aaron Rodgers and his fiancée, actress Shailene Woodley, have officially broken up. If you need a moment, I completely understand.

This news comes almost a year to the day that Rodgers dropped a bombshell on the football world at the NFL Honors event that not only was he secretly dating the Divergent actress, he was getting married to her.

After a whirlwind year of pandemic confinement together, talk of fatherhood, and a lot of “cuddle time,” singing and dancing, the couple that was “meant to be together” are no more.

Apparently, Aaron Rodgers was putting football ahead of his nauseating relationship with Woodley. It also explains why we never did get to see her at any of the Packers games this year.

Hall of Fame Chicago Bears linebacker, recently verified on Twitter, has been on a rampage tweeting up a storm and putting everyone he dislikes in a body bag, including one Aaron Rodgers.

Dick Butkus apparently didn’t take too kindly to Aaron Rodgers telling Chicago Bears fans that he owns them after an October victory at Soldier Field.

Aaron Rodgers is one of Dick Butkus’ favorite targets on Twitter

So, naturally, he was one of the many folks on the internet who chimed in with their thoughts on the romance of the century of the year dying a quick death.

“For all of you who have asked, I am not the reason Shailene Woodley and @AaronRodgers12 have broken up,” Butkus tweeted.

Dick out of nowhere becoming the best twitter around

That sounds like something someone who came between Shailene Woodley and Aaron Rodgers would say.