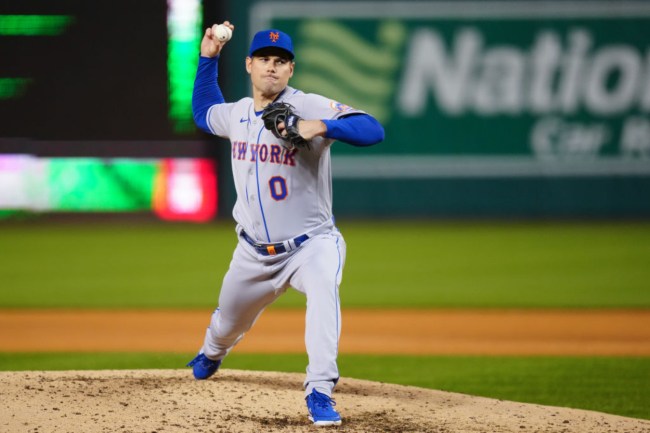 New York Mets reliever Adam Ottavino may throw one of the nastiest sliders in baseball history, just ask Adam Duvall. The Atlanta Braves outfielder had quite the view of the pitch on Tuesday afternoon.

Ottavino took the mound for New York in the sixth inning of Tuesday’s contest looking to hold off the Braves, who managed to score three runs in the fifth frame.

The reliever made easy work of both Travis Demeritte and Dansby Swanson to start the inning, but then came the pitch against Duvall.

Ottavino’s slider began on the outside corner of the plate, but ended up well outside of the strike zone leaving Duvall looking absolutely ridiculous following his decision to swing.

If only Duvall’s bat was about three feet longer he may have had a chance at making contact.

While it’s always more fun to see hits and home runs at the ballpark, seeing a pitcher do that with a baseball is just as entertaining. People can’t do that with a whiffle ball in their hand, let alone an actual baseball.

Duvall ended up striking out in the at-bat, and yes, Ottavino got the K throwing all sliders.

I thought that first one was a pickoff attempt. https://t.co/va1JC8FvJL

This ball realized it's exit was on the left at the last moment. https://t.co/sRBquHqfJN

…… how? How can you throw this? https://t.co/dNtvACOvAu

First one legit starts a foot out of the zone and keeps going. https://t.co/uwxglozdxi