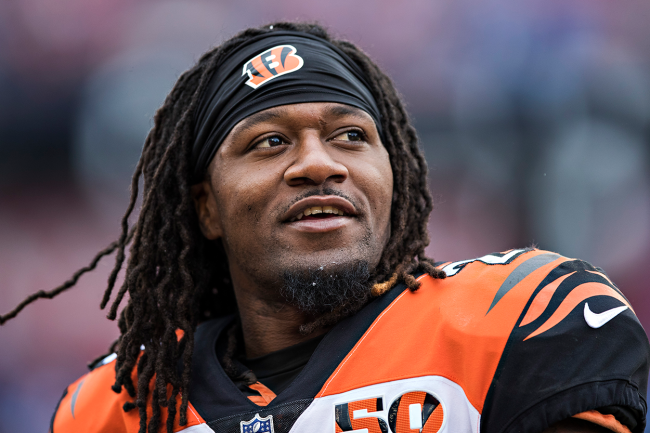 Chris Henry and Adam ‘Pacman’ Jones were two of the most dynamic college football players of their time at West Virginia. Though they played different positions, they were great friends and close teammates.

However, after four years in the NFL, Henry tragically passed away at only 26 years old in 2009. It was a monumental moment in sports, as he represented the first case where an active NFL player had died and was diagnosed with CTE.

Henry’s untimely death left behind his two sons, Chris Jr. and DeMarcus, who have both been adopted by Jones. Jones, who dealt with off-field issues throughout his career, is trying to get his life right and wants to be a great role model for Henry’s two sons, who are now his kids and are both on their way to successful football careers.

Chris Jr., though only 14 years old, is in high demand. He is a Class of 2026 recruit, will be a freshman in high school this year, and is already listed at 6-foot-3, 170 pounds— which might be a significant understatement. He looks closer to 6-foot-5 already.

Like his father, Chris Henry Jr. is an insanely talented wide receiver.

Take a look at him put this defensive back on skates and leave him in the dust:

Even though Chris Jr. is not even a high schooler, he has already received an invitation to the 2026 Under Armour All-American Game. He is expected to be a high four-star or five-star recruit.

In addition, Chris Jr. already has multiple D-I, FBS scholarship offers. He received one from Ohio State earlier this month and also has interest from UConn, Penn State and West Virginia— his father’s alma mater.

“It’s really important to live up to my dad’s legacy,” Chris Jr. told WCPO. “I think about it a lot when I’m on the field. I think he would be pretty proud of me right now, to see where I am.”

Earlier this week, Chris Jr. picked up his seventh offer from the University of Miami. He received the offer in-person from head coach Mario Cristobal and had his adopted father, Jones, with him.

For Jones and his late teammate to be connected in such an incredible manner is truly amazing. He spoke about what Chris Jr. and DeMarcus (a Class of 2027 receiver) mean to him last year and couldn’t hold back tears.

Chris Henry Jr. and DeMarcus Henry are both on their way to following in their dad’s footsteps and they have someone who has been through the same process and learned from his mistakes to guide them. It’s pretty special.