Adam Schefter Trolled After The Worst ‘Lambeau Leap’ In History 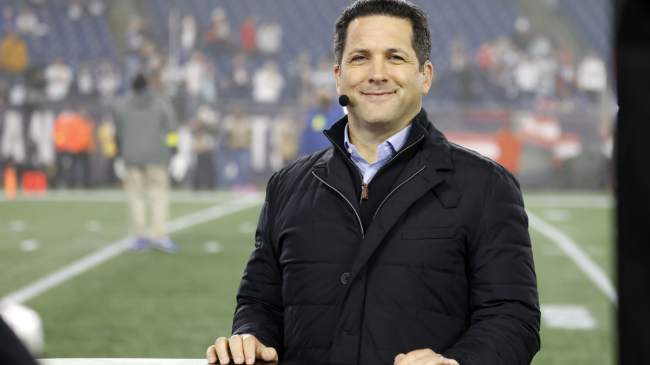 A prominent NFL media personality is making headlines for all the wrong reasons this weekend. Adam Schefter has become the butt of jokes after a failed attempt at the famous “Lambeau Leap.”

Clips of Schefty have now gone viral on social media, and the fan reaction is absolutely priceless.

The “Lambeau Leap” is a widely known touchdown celebration seen weekly in Green Bay. The move was made famous in the 1990s, surprisingly by defensive player Leroy Butler after he scored on a fumble recovery in a game against the Raiders.

This week, the NFL on ESPN crew was on hand for a Monday night matchup between the Packers and Rams. With the game being played in a wintery Wisconsin, Schefter decided it to be the perfect chance to take his shot at the patented celebration.

And he failed epically.

Schefter barely gets off the ground on his leap, having to extend his arms in desperation so that the Green Bay crowd could pull him up. Fans on social media were quick to post reactions to the comical leap as they hilariously trolled the NFL insider online.

One person wrote, “You could just barely slide a sheet of paper under his feet when he jumped.” Another said, “There is not even an athletic hair on his body.”

This fan commented, “Adam Schefter has ZERO bounce,” after seeing the embarrassing leap.

The performance left a lot to be desired from viewers at home. Luckily, he’s getting a master class on the celebration from Packers playmakers who’ve gotten their team out to a 24-12 lead through three quarters of action.

Green Bay will look to close things out and keep their slim playoff hopes alive. Schefter will need to work on that leap before his next appearance on the frozen tundra.