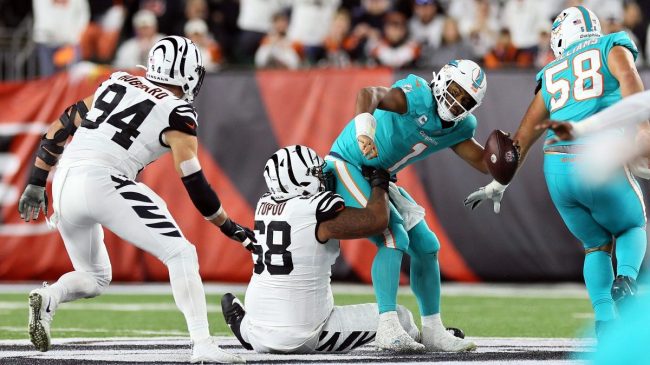 All anyone around the NFL is talking about Friday morning is the horrific injury suffered by Miami Dolphins quarterback Tua Tagovailoa.

Tagovailoa left Thursday night’s game against the Cincinnati Bengals after suffering an apparent head injury on a second-quarter sack. It was the second such injury for Tagovailoa within a five-day stretch. The first came against the Buffalo Bills on Sunday and led to an investigation by the NFLPA.

Tagovailoa reportedly left the hospital on Thursday night and is set to return to Miami with his teammates. But current and former players across the league aren’t happy with the way the Dolphins handled his injury situation. Despite that, Miami head coach Mike McDaniel defended the way his team assessed and treated its franchise quarterback over the last week.

Now other franchises are claiming that they would have handled the situation differently.

ESPN NFL reporter Adam Schefter went on the network’s morning show, Get Up, on Friday to discuss the Tagovailoa situation. What he revealed on the show was somewhat shocking.

Schefter stated that he spoke to multiple teams that said their medical and training staffs “would not have allowed” Tagovailoa to play on a short week.

“Now, he did play. And every team has a different medical staff and different standards. But, again, I come back to ‘gross motor instability.’ It’s the phrase that’s in the protocols. It’s the phrase that people are using. People have said he has a concussion. The Dolphins said he didn’t have a concussion. We don’t know whether he did or he didn’t. What we do know is that when he walked off that field on Sunday, something did not look right. Something was wrong. And Tua was allowed to re-enter the game after being cleared by the doctors leading up to the circumstances last night that left everybody with a deep, disturbed feeling about how the system had failed.”

McDaniel claimed that Tagovailoa suffered a back injury against the Bills that led to his instability. But many questioned that fact. Particularly in light of the latest injury.

It’s unlikely that fans will every know the true circumstances of the injury. But it’s clear there is a lot of skepticism right now around the Dolphins’ medical staff.