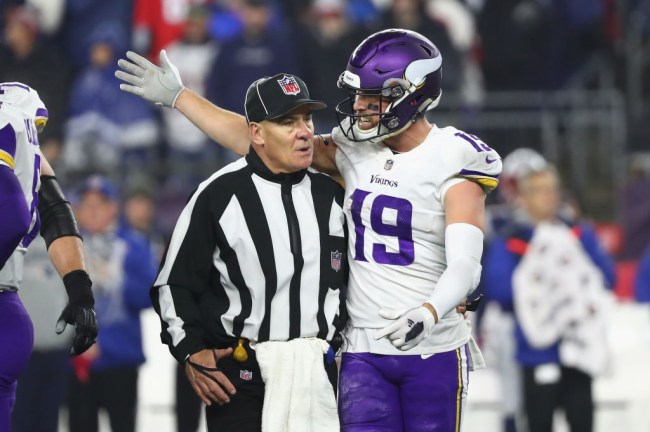 During the fourth quarter of last night’s Patriots vs. Vikings game, Vikings wide receiver Adam Thielen and Pats head coach Bill Belichick got into a brief, angry exchange as Belichick threw the challenge flag on a fourth-and-inches when the Vikings appeared to get stuffed before the yard markers.

Here’s the transcript of the exchange:

From the lip-reading department:

Bill Belichick (looking in Thielen's direction): "Shut the f— up."

After the Vikings 24-10 loss, Thielen recalled the genesis of the disagreement, citing that he believed the Patriots were using shady tactics to gain an advantage.

“Interesting timing for a guy to go down. It was a close play that could’ve been reviewed. For me, I just lost my emotions.”

“I just thought the play was cheap. I wasn’t directing it towards him. I just thought the play was cheap. But, like I said, I let my emotions get the best of me. It’s a smart football play — if you are in that situation, why not? It’s not cheating. There’s no rule against it, from a guy going down. I don’t know if he was hurt or not. He might’ve been hurt. That’s fine, it is what it is. Just interesting timing for a guy to go down when it’s a close play.”

Thielen is referring to the clock stopping for an injury timeout as Patriots safety Patrick Chung went down, conveniently giving Belichick and the Patriots more time to decide if a challenge flag was necessary.

After the game, Belichick described how much of a baby back bitch Thielen is and how he wishes his career nothing but bad fortune. Just kidding. He was vintage Bill.

Thielen will be a Patriot before his career’s over. Book it.