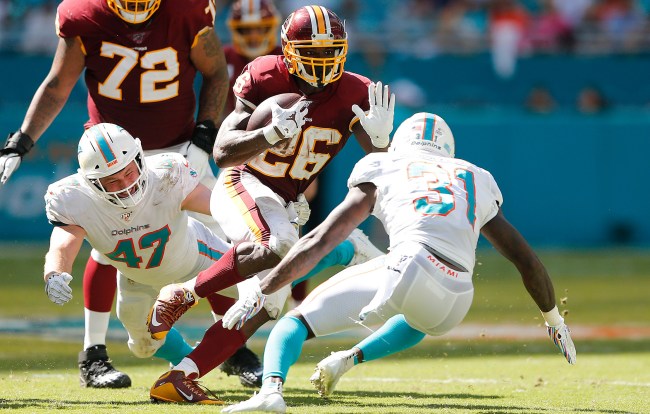 To say this has been one of the weirdest seasons of Adrian Peterson’s illustrious 13-year NFL career would probably be an understatement. (The weirdest would have to be 2017 when he played for both the Arizona Cardinals and New Orleans Saints.)

This season began with Peterson being a healthy scratch for the first time in his career, sitting out the Redskins’ first game of the season, and then basically being mocked by then head coach Jay Gruden after the game.

Then, after an 0-5 start, Gruden, who appeared to have very little interest in actually coaching the team (later all but confirmed), was fired.

This past Sunday, in what had been dubbed everything from the Suck Bowl to the Tank Bowl, Peterson had by far his best game of the season, running wild for 118 yards on 23 carries (5.1 YPC) as the Redskins picked up their first victory of the season over the still winless Dolphins 17-16.

During the third quarter of that game, on a 2nd-and-5 play, Washington’s quarterback (this week) Case Keenum attempted to call an audible from a run to a pass, shouting “kill, kill.”

Peterson very clearly disagreed with Keenum calling the audible, so much so that he took his mouthpiece out and told Keenum to change the play back to a run to the right side of the line.

Keenum immediately shouted out “reload, reload” to change the play back to the original call and, sure enough, Peterson ran for a first down.

Great shot by Fox here. Keenum didn't like the look so called "kill, kill". Behind him, Adrian Peterson told him to keep the run called, so Keenum then calls "reload, reload" and Peterson gets the ball handed off #Redskins pic.twitter.com/S7gBjvOqku

After the game, when asked about the play, Peterson claimed that the coaches were signaling for Keenum to stick with the original call and he was just making sure his quarterback was aware.

Sure, AP, we totally believe you.

Of note: over 100 of Peterson’s yards on Sunday came in just three quarters. Perhaps the Redskins should have been listening to Peterson from the jump.