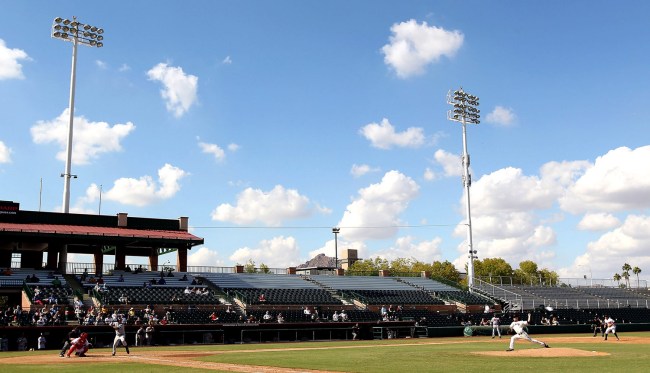 As of February 11, 2019, 310,903 players had been recorded as playing in professional baseball’s “minor leagues.” 19,429 players have appeared on a Major League Baseball roster. Factoring out players who never played in the minors (straight from high school or college, or came directly from a foreign country) that means around 6 percent of minor league baseball players ever make it to “The Show.”

Take out all of the players who played just one game (or less) in Major League Baseball and the number drops to around 5.5 percent.

These facts wouldn’t be so terrible if those other 94.5 percent of baseball players actually were making a decent living playing in the Minor Leagues.

As we have seen, however, being a Minor League Baseball player these days more often than not means trying to survive financially while living below the poverty line.

One example which crystallizes what kind of financial hardship Minor League Baseball players have to deal with was shared on Wednesday by baseball agent Joshua Kusnick.

Kusnick explained on Twitter that he has a Minor League Baseball (MiLB) client who showed up to MLB Spring Training two weeks ago.

His client is not being paid while he is there because Spring Training for Minor League players hasn’t officially begun.

He had to get a room at that hotel because, according to the rules currently in place if a player has a car, he must stay at the hotel.

But he receives no reimbursement for the gas he consumes driving himself to and from the park.

So he’s already spent 20 percent of his annual salary and he hasn’t even played in a game that counts yet.

Have an milb client who showed up 2 weeks ago

He isnt being paid because spring training didnt start for milb 10 dollars a day per diem.

Player has no choice in staying at hotel
Pays own way to field!

No gas reimbursement.
If player has a car he must stay at hotel

Kusnick isn’t alone with his concern.

I have a client.
They pay for their own rent, food, and transportation without a per diem or salary of any kind. They pay for people to teach them things about their future career.
This is insanity! Someone has to change this!

The problem with this right here is that you said future career. The moment the sign with a MLB Team they become professionals. Minor league players are professional ballplayers and they deserve to be paid as such and for a living wage where the above situation doesn't happen.

and this is where the problem shows itself. Interns should work free/cheap. I agree. Rookie ball, short-season, instructs. I get they shouldn't get paid much. Few of them make any dent in the pros. Like 10% make it to MLB. Full season and up should get paid 30k/year minimum

Oh well, at least they can smoke some all the weed they want now to take the edge off. If they can scrape together enough money to actually purchase it, that is.