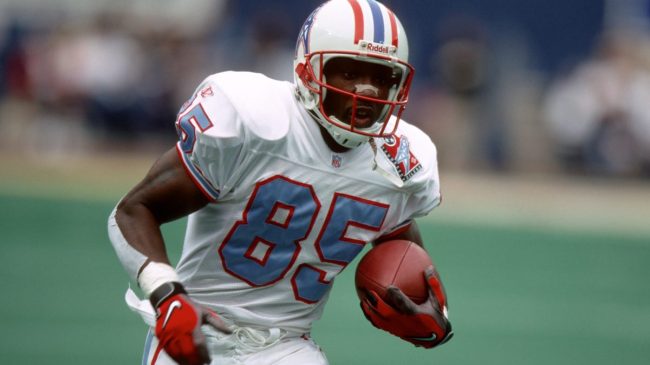 Former Titans star AJ Brown went off on an angry fan on Twitter this weekend, claiming that he was the best receiver to ever play for the franchise. The message came as a response to someone who’s still very bitter about the way things worked out between Brown and the team.

The original message referred to Brown as a “villain,” to which the wideout fired back.

For the love of God , I was the best receiver to play for your franchise. Shut up and move on. You mad at the wrong person 🕺

Brown played three seasons in Tennessee, accumulating 185 catches, 2,995 yards, and 24 touchdowns. The second-round pick has since been traded to the Philadelphia Eagles, where he’ll look to continue his production with new quarterback Jalen Hurts.

Brown’s value to the team was undeniable. The Titans made the playoffs every year he was with the team with Brown tallying a pair of 1,000-yard seasons. Unfortunately, it appeared as though the Titans were unwilling to pay the asking price of a new contract in what’s been an insane wide receiver market this offseason. Instead, they landed a few draft picks and will look to build for the future.

While Brown’s production in Tennessee was fantastic, one former legend disagrees with his claims of being the best wideout in franchise history.

Former Titans legend Derrick Mason took some offense to Brown’s claims, and he threw a little shade at the organization in the process.

This is what happens when @Titans doesn't recognize the former greats that physically and mentally gave it all for the game. I'm not just talking about myself either. https://t.co/6EOL5MB6uC

He says that this recency bias happens when the team doesn’t recognize former greats, saying he’s not just talking about himself, either.

As far as that title as the greatest WR in franchise history goes, Mason has a case. He racked up 453 receptions, 6,114 yards, and 37 scores over eight seasons with the Titans. Those numbers far outweigh Brown’s due to his longevity with the team. Many in the comments agree that it’s Mason, not Brown, who is the best pass catcher to play in Tennessee.

As for the shot at the Titans, things ended a bit rocky between the two sides. After eight seasons, Mason signed with Baltimore in free agency. He then made it clear that he wanted to retire as a Raven despite having spent less time with the franchise.

We’ll let you be the judge in this debate. The Titans appear to be the real losers in this argument as their relationship with both former wideouts is bumpy, at best.