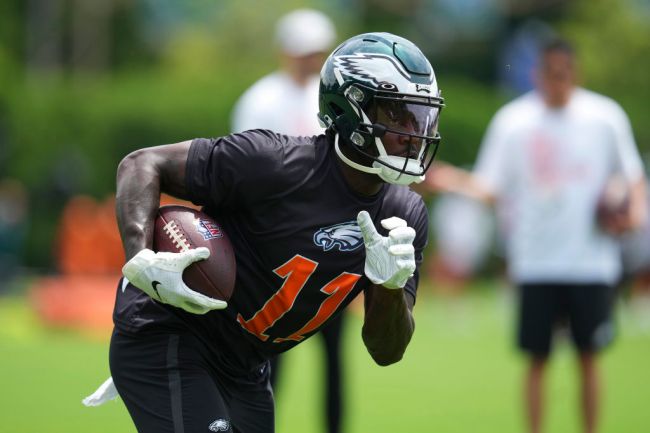 Miles Sanders made headlines earlier this week when he made a comment that reminded Philadelphia Eagles fans of an ill-advised comment from their past.

Sanders referred to the Eagles’ current roster as an “All-Star team”, a comment that was a little bit too close to the infamous Vince Young “Dream Team” comment for comfort.

Oh man. We all feel like we’re on an all-star team, so we feel great. We feel unstoppable, I’m not gonna lie. The vibes are great, always have been. Nick Sirianni is doing a great job just keeping the vibes right, the chemistry good. We compete a lot in practice. But we’ve gotta see. It’s gonna come down to camp, taking it day by day, putting everything together.

Today, Sanders’ new teammate, AJ Brown responded to that comment and revealed a take on the current Eagles roster that is much less likely to be something opposing fans can make fun of later.

He’s excited about what this team could be. We all are. But we’re not An All – Star team . We definitely could be with years to come. We have strap up our pads and prove it every year and that’s what we plan to do! #1Weekatatime https://t.co/y6ycsDLVxK

Brown’s addition to this Eagles roster is a big reason why the hopes are so high in Philadelphia right now. The Eagles have struggled for years to find a top-tier receiver for their quarterbacks to throw to, repeatedly whiffing in the draft.

That’s no longer the case with Brown and Devonta Smith at receiver. Now Jalen Hurts just needs to make the most of these weapons for the Eagles to really turn into an “All-Star team”.