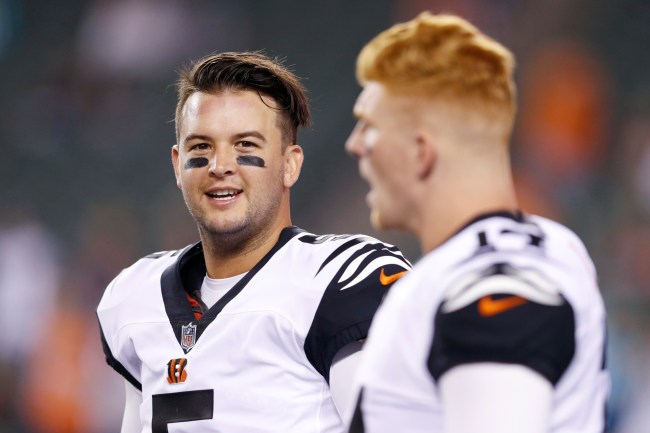 If you’re a Cincinnati Bengals fan, the first two games of the 2017 have been football hell for you. Your team has yet to score a touchdown through eight quarters of play and your Pro Bowl quarterback is putting up head-scratching numbers. Dalton is the first QB since 2011 to have 0 TDs and 4+ interceptions in the first two games of the season and his 47.2 passer rating is less than half of what it was when he set the Bengals franchise record back in 2015, posting a 106.2 rating. Certainly not the same quarterback who has taken his team to the playoffs five of the last six seasons (despite being in the midst of a 26-year playoff win drought).

Frantic Bengals fans are calling for A.J. McCarron to take Dalton’s job before what promises to be a arduous contest against the Packers at Lambeau Field on Sunday. Members of local media have swarmed Dalton’s locker hoping for a verbal implosion, but McCarron has helped temper the chaos by sticking up for his teammate.

“I wish people would in this city would back him and go with it,” McCarron said. “Listen, I think I’m a great quarterback and I think he’s an unbelievable quarterback. I love him to death. But he’s our quarterback. Stop making it into something else. It’s not into something else. Ride with him. Trust the team. Trust the process. And trust what we are trying to do. And be a fan of who is playing. We are all part of a team.”

“He’s our quarterback,” McCarron said. “I wish people would – it sucks to see for me personally with my relationship with him people booing him. It’s like, do you think he wants to have tipped balls that turn into interceptions? Has he worked his whole life for that? His whole week for that? No. He’s a normal human.”

“Me and him have a great relationship and I think we’ve both handled it really well,” McCarron said. “We know what nonsense is. He’s our quarterback and I’ll leave it at that. I trust him every time he steps out there and I think we are going to win every time he is under center.”

McCarron started three games during the 2015 season when Dalton went down with a thumb injury and demonstrated potential, completing 66% of his passes for 854 yards, 6 TDs, and 2 INT. If Dalton lays an egg against the Packers, Marvin Lewis will have no choice but to thrust the third year quarterback into action.