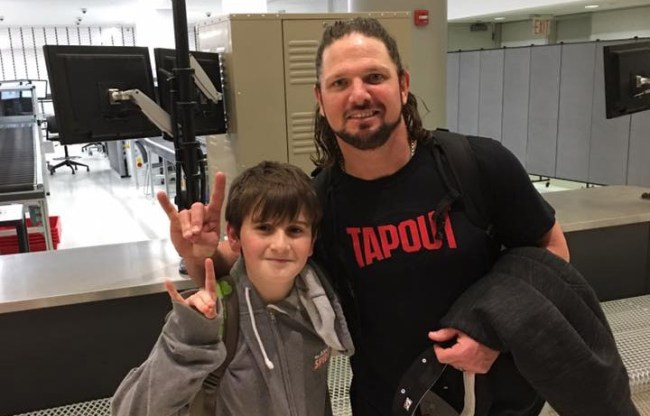 A.J. Styles may no longer be “the face that runs the place” after losing his WWE Championship to John Cena at the Royal Rumble on Sunday, but he still has something far more valuable than a title.

On Monday, Styles shared a heart-breaking letter he received from the family of a young fan.

It's not what you do inside the ring, it's what u do outside of it. I am thankful for this moment with Nicky. https://t.co/g4zQ1GfBW9

Pls RT. A letter my uncle was going to write w my cousin to @AJStylesOrg and now had to write on behalf of him. Hope you see this AJ. @WWE pic.twitter.com/0xIt1qjEjU

In the letter, we learn that sad tale of one of Styles’ biggest fans, a young boy named Nick Bongiovanni.

It reads in part…

You see, Mr. Styles, Nick had ADHD and when Nick liked something he would hyper focus on it. So Wrestling, WWE in particular was his love. From the moment he opened his eyes to the minute he closed them it was all about wrestling. If he wasn’t playing with his figures, he was on the Xbox or on the computer looking up things about wrestlers. The WWE was like family to him.

The letter then tells the story of how Nicky had received tickets to a WWE show for Christmas, but his Nana passed away and Nicky wanted to be with her so he gave his tickets to a friend.

“We’re walking through the Terminal and I hear Nicky say “Mom there goes Dolphin Ziggler.” But Ziggler had earbuds in and didn’t hear him. Then I hear him say very excited “that’s AJ Styles” your response was “what’s up Bud, I have to catch a flight for a show in Chicago,” my wife told [you] we were on our way to his Nana’s funeral. At that point you stopped dead in your tracks and said “Come here bud, who has a camera.”

Now I know this must happen to you all the time but it was so very special to him. It was all he could talk about and we said we were going to write to let you know how special it was.

Sadly, on January 26th, Nicky had an accident that left him brain dead. Nicky and his father had planned on writing a letter of thanks together to Styles, expressing how much it meant to them, but instead Nicky’s dad had to write it by himself.

“You could of just walked by but you stopped and made one special little boy so happy!” wrote Nicky’s dad.

Sadly, Nicky passed away only a few hours after the letter reached Styles.

It's with a broken heart that I tell you Nicky passed this afternoon, shortly after @AJStylesOrg's phone call to my uncle.

The family had started a GoFundMe to help with Nicky’s medical bills and the funeral and thanks to some help from Styles they were able to reach their goal in less than twelve hours.

Thank you to the #WWE community for your support, prayers and kind words all day. If you'd like to help financially: https://t.co/Uy7hY4mmUS

Who needs things like a championship belt when just the simplest of gestures can turn out to mean so much, right? Something to keep in mind in these trying times.