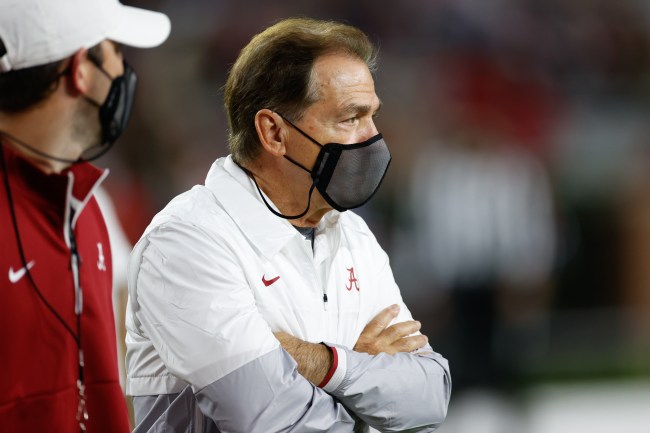 Nick Saban has tested positive for Coronavirus for the second time this season, the University of Alabama announced. This time, however, it will not be considered as a false positive.

“This morning we received notification that Coach Saban tested positive for COVID-19. He has very mild symptoms, so this test will not be categorized as a potential false positive. He will follow all appropriate guidelines and isolate at home,” Tuscaloosa Dr. Jimmy Robinson and athletic director Jeff Allen said in a statement on Wednesday morning.

This diagnosis means that Saban will be unable to coach in the Iron Bowl on Saturday, and could potentially miss more games depending on when his symptoms subside. Per Southeastern Conference protocol, he will be isolated for 10-days from his positive result, which came on the 25th. Should his symptoms subside for a least two days prior to next Friday, he will return a day before the Crimson Tide’s scheduled game against the Arkansas Razorbacks.

Earlier this season, Saban received a positive result prior to Alabama’s top-five matchup against Georgia. The game was crucial in the landscape of the conference’s standings and results, and coach was not experiencing symptoms. To account for false positives, the SEC has allowed for coaches to test out of protocol with two consecutive negatives. Saban tested negative prior to the game and then had his second test rushed to the lab on the day of the game to ensure he would receive the result before kickoff. It was also negative and he was allowed to return to the sideline for the Tide’s 41-24 romp of the Bulldogs.

Alabama is the nation’s No. 1 team in the first College Football Playoff rankings, which were released on Tuesday. Auburn will travel to its northernly rivals for a 3:30 p.m. EST kickoff on Saturday and enter ranked No. 22. With Saban out, offensive coordinator Steve Sarkisian will handle head coaching duties. Sarkisian has previously been the head coach at Southern California and Washington.