Alabama Vs. LSU Football Game Will Be Postponed Because Of A Halloween Party, COVID-19 Concerns 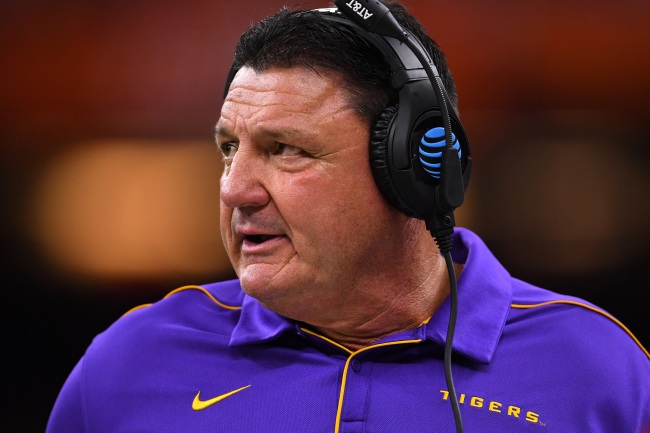 It’s official. After a week of rumors and whispers throughout the college football world, this weekend’s matchup between No. 1 Alabama and its top in-conference rivals LSU will not be played as scheduled. The postponement stems from a large spike in positive COVID-19 cases in the Tigers program.

NEWS | The Alabama at LSU and Texas A&M at Tennessee FB games of Nov. 14 are postponed due to positive tests, contact tracing & subsequent quarantine of individuals within the LSU and A&M FB programs.

For college football to be played this season was going to come with challenges, and there was bound to be outbreaks and cancellations. This is the second time that LSU has been impacted by Coronavirus, with the team’s contest against Florida also postponed after an outbreak hit the Gators locker room. The game was supposed to be played on Oct. 17 and has since been rescheduled to Dec. 12. That makes things difficult.

When the Southeastern Conference rolled out its schedule, it included a “buffer week” prior to the conference championship in the case that a postponement occurred. The Tigers have already been forced to play that week, leaving little wiggle room for rescheduling.

Fortunately, in some ways, the reigning national champions are not very good this year, so it may not have been/might not end up being as competitive as we’ve become accustomed. Either way, things get tricky and being unable to play one of the nation’s biggest rivalries is a bummer.

There has not been an announcement regarding if or when the Crimson Tide will be able to head down to Baton Rouge this season, but the ramifications of a 10-day quarantine period will surely effect next weekend’s matchup as well. For the game to be postponed means that the Tigers either do not have enough players to field a full 53-man active roster on Saturday or lack depth at one or more positions that are irreplaceable. It will be difficult to get fully healthy prior to LSU’s Nov. 21 game against Arkansas.

From what head coach Ed Orgeron said earlier this week, it seems like the contact tracing quarantine protocols are playing a large role in the postponement. If a player is in contact with someone who has tested positive, the SEC requires the person in question to quarantine for 14 days. A few coaches around the league, including Ole Miss head coach Lane Kiffin, have questioned the regulation and ask two major questions: why can’t players test out of quarantine, and why is the quarantine period four days greater for close-contact players as opposed to players who tested positive. Either way, those are the rules.

Per Sports Illustrated’s Ross Dellenger, the outbreak has been traced back to a Halloween party. No information has been reported about who was there or how many of the players in attendance tested positive.

#LSU’s outbreak stems from a party around Halloween and, because of contact tracing, has put the Tigers dangerously close to the SEC’s 53-man threshold to play, sources tell @SINow.

Team is very thin at defensive back and quarterback.

As for Alabama, COVID-19 numbers are unknown, but it sounds like the Crimson Tide have enough healthy players to play. Head coach Nick Saban initially tested positive in October ahead of a home matchup vs. Georgia, but was cleared to coach on the day of the game after it was deemed a false positive.