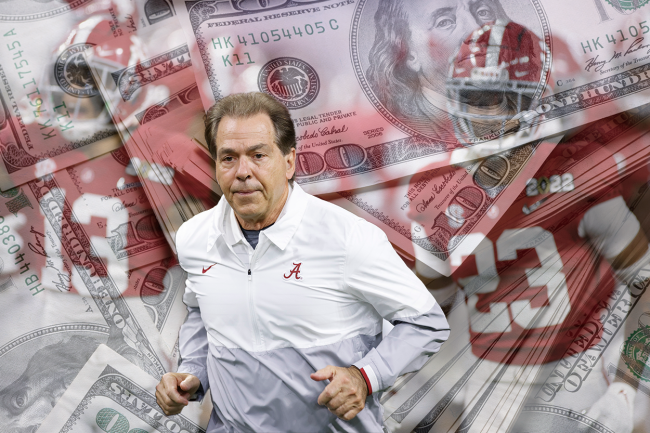 It has been less than a week since Alabama lost the College Football Playoff National Championship to Georgia and now the Yellowhammer State is taking the gloves off. Alabama state legislature is moving to repeal the state’s law on Name, Image and Likeness, which changes the game in terms of recruiting.

When the NCAA allowed students to profit from their Name, Image and Likeness on July 1, 2021, it changed the landscape of college athletics, particularly football. Where college athletes could not be paid before, they are now able to earn money for their person.

However, Alabama passed a state law that restricted what was and wasn’t allowed, even beyond the rules that the NCAA put in place. As a result, college programs in the state were at a disadvantage to schools in Texas and Michigan, among others.

On the heels of a report that Texas A&M boosters spent an unfathomable amount of money on its recruiting class and a loss in the national title game, the state is now looking to repeal that law. It would allow schools to operate under only the NCAA’s rules, which are less restrictive than what is currently in place.

House Bill 76 was approved by the House State Government Committee without debate on Wednesday.

“It’s just a straight repeal of what we did last year,” sponsor Rep. Kyle South, R-Fayette, told Alabama Daily News. “We were thinking that the NCAA last year was going to go in one direction and they ended up adopting basically a different rule that was kind of a blanket for everybody. And it left us in a place where our state law was more restrictive than what the NCAA adopted.”

What this means is that Alabama and Auburn are about to go to work.

Nick Saban spoke about the current climate of Name, Image and Likeness last week and offered a stern warning that sounded more like a threat. Now he can make good on his threat, which is bad news for the rest of college football.

This year’s recruiting class marks the first time since 2010 that neither Alabama nor Georgia are atop the rankings. That won’t happen again.

What is happening at Texas A&M is about to happen in Alabama.

By repealing the legislature that was put in place last year, the Crimson Tide, the Tigers and every other school in the state is back on a level playing field. In turn, Alabama schools can operate like the Aggies.

What that means in terms of recruiting is substantial.

Unlike this past year, schools will be able to indirectly use NIL as a recruiting tool. It always has been and still is illegal to pay a player for his commitment.

However, there is now a grey area that Alabama schools will be able to take advantage of when their state legislature on NIL is repealed.

Where they couldn’t before, a program can weaponize NIL. Boosters, behind-the-scenes, can establish funds for a player prior to his enrollment.

A coach can then say to a recruit something along the lines of “I know of X amount of money that is available in NIL should you choose to enroll at X school.” And then, if the recruit chooses that program, those deals can be inked and paid out upon enrollment.

Based on the current legal restrictions, Alabama boosters can’t do that. Texas A&M boosters, and countless others, are.

When the law is repealed, the handcuffs on Saban and Bryan Harsin are removed. Look out.