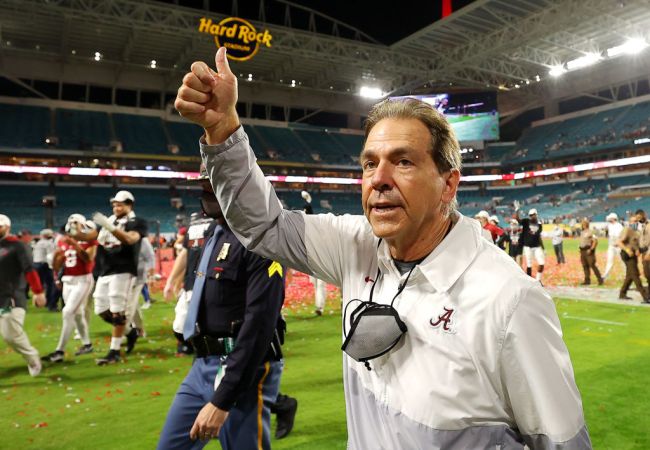 Nick Saban and the Alabama Crimson Tide know how to recruit. Finding talent and then developing said talent is why Saban has seven national titles to his name, six of which coming while at the helm at Alabama.

So, the fact that Alabama has offered an eighth-grade running back shouldn’t be a surprise, especially when you see the size and ability of this kid.

Keylan Moses, an eighth-grader out of University Lab High School in Baton Rouge, looks more like Titans’ running back Derrick Henry than he does a kid that can’t even drive a car yet. He also happens to be the younger brother of Alabama great Dylan Moses, who recently signed with the Jaguars.

The clip below is hilarious, scary, and utterly insane of Moses toying with kids on a simple draw play.

Those poor, poor defenders. A special shoutout to the kid at the 19-second mark that tries to go high on Moses and ends up hitting the turf immediately.

Moses will be going up against kids his own size throughout his high school career, but I think it’s a pretty safe bet that he’ll be one of the most special playmakers in the entire state of Louisiana over the next few years.

Moses is just the latest young talent the Tide has offered as of late. Alabama offered class of 2024 offensive lineman Isendre Ahfua out of Seattle, and like Moses, he too is rather large for his age. Ahfua is listed at 6-foot-5, 330 pounds.

It’ll be interesting to see if Moses or Ahfua commit to Alabama, but they’ve got literal years ahead of them before they have to make that decision.