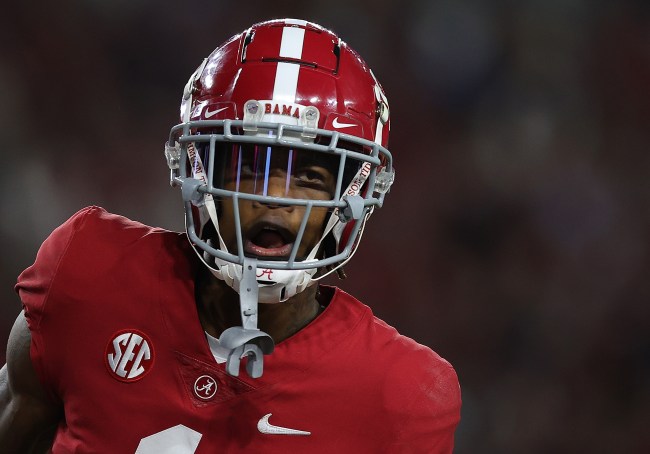 It’s an absolutely baffling occurrence for a team coached by Nick Saban. Really, it would be baffling for any coach, but how does Nick Saban of all people allow this to happen?

In the second quarter of today’s Iron Bowl, Alabama’s top receiver, Jameson Williams, was sent out as a part of the punt team. Williams then proceeded to lower his helmet and deliver a blow to the head of Ja’Varrius Johnson, Auburn’s punt returner.

It was an easy call for the officials to make. Williams was quickly ejected for targeting upon review.

The real question here is what was Saban thinking? Why would you ever put such an important part of your offense in the game on special teams? With so much potential for injury on special teams plays and the possibility of a penalty like this, it would be a questionable move to put any regularly used offensive player in on special teams.

To make matters worse, this ejection came at a time where the Crimson Tide are badly struggling to move the ball, let alone score. In the first half of the game, Bama only had 68 total offensive yards. Williams had 43 receiving yards.

The real cherry on top of the whole situation is that the penalty gave Auburn the ball at Alabama’s 39 yard line. It set them up perfectly to drive right in and take a 7-0 lead.

That leaves Alabama facing a major uphill battle thanks to some poor decision making in a game where the Tide were already struggling.

Now we’ll wait and see if Nick Saban has anything up his sleeve to make up for this major blunder and save Bama’s Playoff hopes.