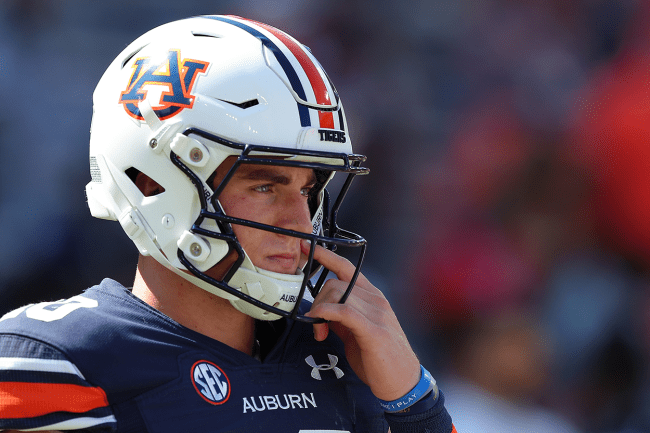 Auburn quarterback Bo Nix is out for the year after undergoing season-ending ankle surgery. That isn’t stopping him from taking shots at Alabama— or, in this case, the officiating bias toward Alabama.

Nix, who joined the Tigers as the nation’s No. 1 dual-threat quarterback recruit in the Class of 2019, took shots at Southeastern Conference referees on Monday. His comments come five days before the Iron Bowl and could not be more soft.

There are few things worse than a fan who constantly complains about calls going against his/her team. It happens to all of us, but there is a certain subset of fans who believe whole-heartedly that the officials are out to get them with every moment of every game. They are unbearable.

Nix is doing exactly that, and being that guy, but as player who cannot play.

During an appearance on “The Next Round,” Nix pointed to some controversial calls going in favor of the Crimson tide during a close win over Arkansas on Saturday. While his concerns may have a base to stand on, for him to be commenting about a rival’s win over a team that is not his before his team plays said rival is incredibly lame.

In reference to some key calls that went Alabama’s way, here is what he had to say:

“Just a few of those obviously controversial calls that were in that game, it raises some questions, for sure, I guess, unless you’re an Alabama fan,” he said. “That’s just part of the game. We’ve discussed it over and over and over. That’s not going to change, no matter what happens. It was a good game, for sure.”

When given a chance to clarify his comments, he doubled down:

“I think, legitimately, you watch the game and anybody who is unbiased would think something is different,” he said. “It is what it is. It’s kinda how it has always been. It’s part of the game. And they have good players. Can’t take that away from them.”

Here is the audio of what he said in full:

In response to Nix’s comments, Alabama quarterback Bryce Young — who will be playing in the Iron Bowl and is a Heisman Trophy candidate — put him in his place. Young, with a very slight smirk on his face, essentially said that he is not concerned with Nix’s comments whatsoever.

Young made it very clear that he is worried about beating teams on the field (as someone who is actually playing), not with his rival and their relationship with officials. Unlike Nix, who is more worried about his rival getting calls in a game that didn’t involve his team ahead of a game that he is not playing.