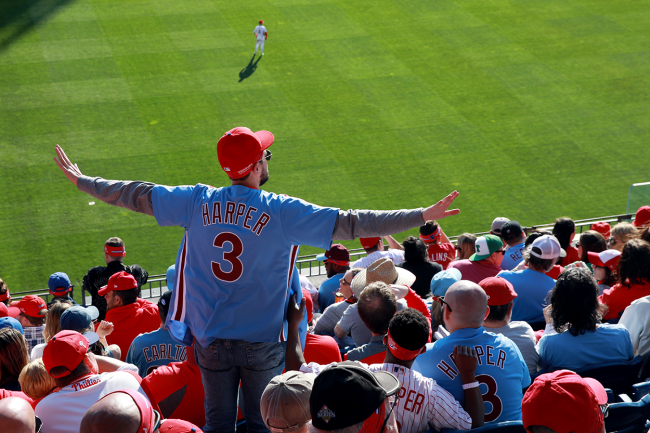 The people of Philadelphia are notoriously crazy about their sports teams. They are a passionate bunch who care deeply about their city, their people, the Phillies, the 76ers, the Flyers and the Eagles.

Philadelphia sports fans demand accountability, honesty and all-out effort all of the time. When they see a player expressing one or more of those qualities, they root for him accordingly, even if he was on their bad side just hours before.

Bohm, a 25-year-old infielder for the Phillies, has been in and out of the Bigs over the last two years. He started up again this season, but struggled in Monday night’s game against the Mets.

At one point, Bohm made three-straight fielding errors and was extremely frustrated.

Alec Bohm has made three throwing errors in three innings tonight. Here they are: pic.twitter.com/sQ1VHKX7cW

On the next play that he completed successfully, the Phillies fans sarcastically cheered his success. In response, Bohm was caught on camera saying “I f**king hate this place” and immediately went viral.

“I fcking hate this place” – Alec Bohm after committing 3 errors in 3 innings.

ya, he’s definitely done in Philly after this if that lip reading is right. pic.twitter.com/mZlFlCSgCC

Bohm was asked about the moment after the game and completely owned up to what he said. He took accountability, apologized and tried to clear the air with the Philadelphians.

"Look, emotions got the best of me. I said it. Do I mean it? No. It's a frustrating night for me, obviously. … These people, these fans, they just want to win. … I don't mean that." pic.twitter.com/Q7VZ2aBoAg

That went a long way with Phillies fans. Rather than denying what he said or running from it, Bohm stood in and took it.

Philadelphia played again on Tuesday night and nobody knew what to expect as Bohm walked up to the plate. Was he going to get booed? Were the fans going to explode in outrage?

They did neither of those things. Instead, the Phillies fans rose to their feet and gave Bohm a standing ovation.

Pretty awesome ovation for Alec Bohm as he steps up to the plate 👏👏👏 pic.twitter.com/iSpNyTYUMn

The city could have turned on Bohm. It would have been the easy thing to do.

However, by applauding Bohm for owning up to what he said, it goes much further. The city is embracing their (at least temporarily) disgruntled infielder.

It was awesome and manager Joe Girardi discussed the moment after the game.

Even Bohm’s teammate, Nick Castellanos, loved what he saw from the city.

"Hats off to the city of Philadelphia for having their player's back like that. Was incredible."

All in all, it was an impressive showing from Philadelphia, which cemented itself as a top sports town on Tuesday. Their fans are amongst the most passionate in the world.