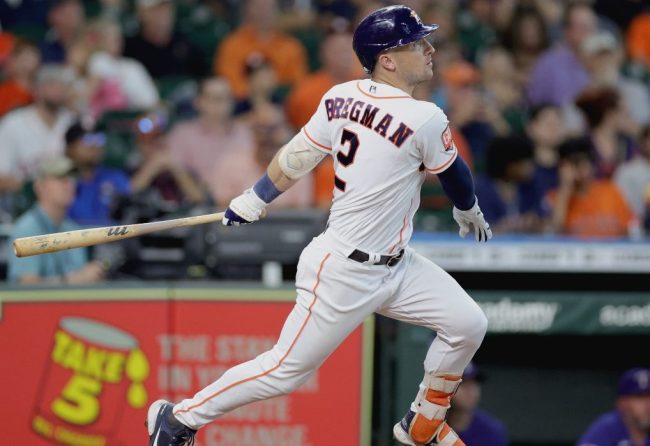 On Sunday, the Houston Astros put on a special night for the victims of the Uvalde school shooting. Before the game started, a young fan requested that Alex Bregman hit a home run. It’s something that isn’t a guarantee in baseball, but the star third baseman made sure to come through for the young fan.

According to Mark Berman, a young girl from Uvalde asked Bregman to hit a home run. The Astros star made sure to come through and he absolutely delivered. He definitely seemed to feel proud of that dinger, as it surely made the evening for that young fan.

Before the game a young girl from Uvalde asked Alex Bregman (@ABREG_1)to hit a home run & he did,helping the Astros win&win 1 for Uvalde on Uvalde Strong Day at MMP:”It was really cool, anything we can do for them. As soon as I got to the dugout Dusty said hey u hit 1 for Uvalde” pic.twitter.com/5oiduK7Pxn

Additionally, Alex Bregman took no time to fulfill the request. He went yard in the bottom of the first inning with his first at-bat of the game. On a 2-0 count, Cole Irvin threw the ball right down the middle. Clearly, it was right in the sweet spot, as the Houston Astros star crushed the ball out of the park. That young fan from Uvalde surely had her night made after this hit.

It’s always awesome to see superstar athletes pull through for young fans like this. Not only did Alex Bregman’s home run help his team take an early lead, but he created a special moment the young fan will never forget. The Astros went on to win the game 6-3, making the evening even more special for the families and victims of the Uvalde school shooting.

Look for the Astros to continue winning as they take on the Chicago White Sox Monday night.