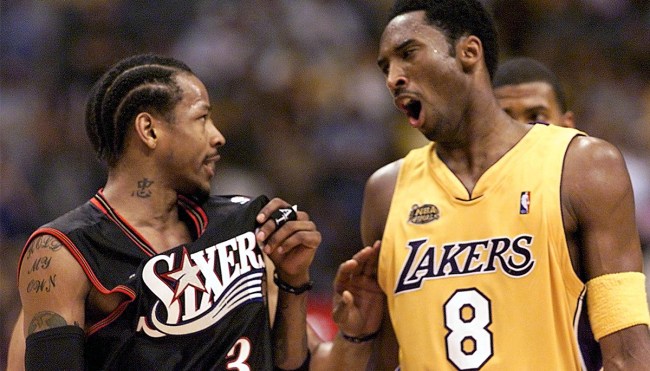 In 1996, the Philadelphia 76ers drafted Allen Iverson with the first pick in the NBA Draft. You have to imagine the franchise was pretty pleased with how that decision panned out, but the same can’t really be said for teams who drafted guys like Kerry Kittles and Erick Dampier over a high school prospect named Kobe Bryant.

Bryant, who was scooped up by the Lakers with the 13th selection, would go on to be the most celebrated member of a draft class that was also home to Ray Allen and Steve Nash. The legendary guard played a major role in leading the changing of the guard that would occur at the turn of the new millennium, but if you remember the glorious era when every middle schooler was rocking an arm sleeve on the basketball court, I don’t have to tell you Iverson left a similarly indelible mark on the game.

Iverson has shared a number of stories about his relationship with Bryant in the wake of the helicopter crash that claimed the life of the latter two years ago, and it’s incredibly evident the two men shared a special bond.

As a result, it’s easy to understand why Iverson got emotional when he was presented with a poster featuring him and Bryant at a recent autograph signing. A stunned Iverson needed to take a moment to collect himself, and he eventually asked the kid who gave it to him where he could get one of his own before giving him a pep talk after signing it.

What an awesome moment for everyone involved.