The AAF’s Leading Rusher, Jhurell Pressley, Is Already Suspended Two Games By The NFL Before He’s Even In The League 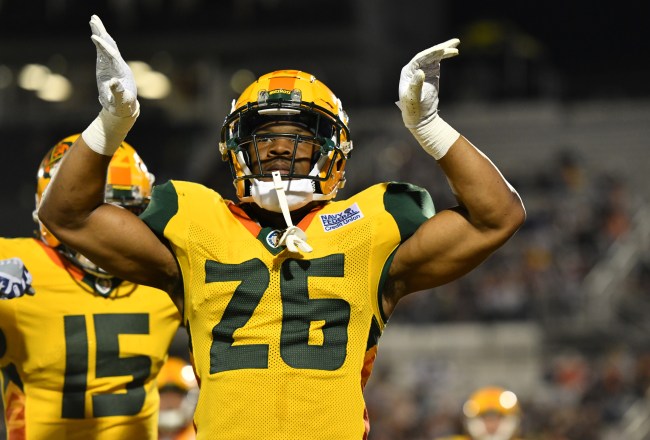 The Alliance of American Football (AAF) officially closed its doors for good earlier this week when the pro league didn’t have enough money to survive. Following the decision to shut the short-lived league down, we’ve heard plenty of stories about AAF players getting unknown charges on their credit cards and being forced to pay their way home from cities they were staying in during the season. Overall, it’s a pretty big sh*tshow.

Now that the Alliance of American Football is done, the league announced that players are free to sign with NFL teams now — which was a comical announcement to begin with since they aren’t employed elsewhere — and one of those players who should get a lot of attention by an NFL club is Jhurell Pressley, who ended the AAF season as the league’s leader in rushing yards with 431 yards on 96 carries. But if an NFL team wants to scoop up the 26-year-old runner, they’ll have to wait a couple of games to see him play in an NFL game, because Pressley’s already suspended two games by the league.

That’s according to NFL Network’s Ian Rapoport, who tweeted out some of the details that he heard from a source. Basically, Jhurell Pressley has a pending issue — whatever that means — that’s impacting what NFL teams may be interested in signing him. Take a look at Rapoport’s tweet below.

AAF leading rusher Jhurell Pressley of the Arizona Hotshots is being suspended 2 games by the NFL for a pending issue, source said. It’s what is delaying his signing. That said, he has two workouts next week & could be signed now that his off-the-field situation is settled.

Jhurell Pressley was an undrafted free agent from New Mexico in 2016 and signed with the Minnesota Vikings before getting cut during training camp. He also briefly joined the Green Bay Packers, Atlanta Falcons, Jacksonville Jaguars and New York Giants, so the dude has bounced around a bit in the NFL, so it’ll be interesting to see which franchise takes a shot on him now that the Alliance of American Football is defunct.

There have already been a few AAF players who have joined NFL teams, so, assuming a club doesn’t mind Pressley waiting to get on the field, the running back’s probably going to join that list, too. Can’t wait to find out what the “pending issue” is that the NFL’s suspending him for, considering their disciplinary rules are all over the place.