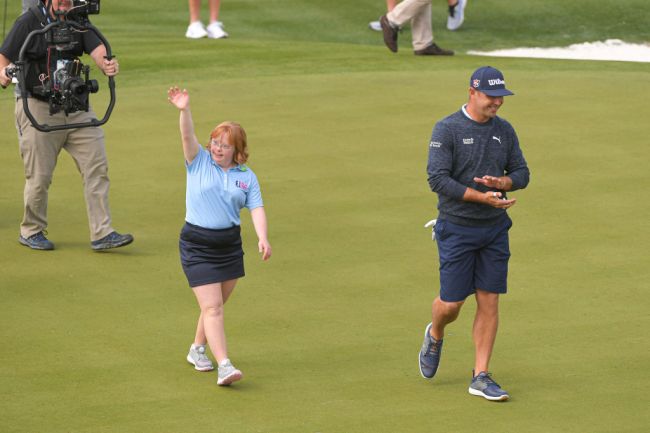 Amy Bockerstette is set to become the first athlete with Down syndrome to compete for an NCAA National Championship next week and her story is an inspiration to us all.

You might remember ‘Amazing Amy’ from when she made par on the 16th hole while playing with Gary Woodland during an incredible moment at the practice round of the 2019 Phoenix Open. The roar of the stadium when she makes her last putt will give you chills.

Bockerstette and her teammates at Paradise Valley Community College are set to compete for the National Junior College Athletic Association women’s golf title next week in Ormond Beach, Florida. The tournament runs from May 10th to 13th, and if you’re not rooting for her, you’re wrong.

The 22-year-old golf dynamo from Indiana is no stranger to making history. Three years ago, when she signed her letter of intent to play for the PVCC Pumas, she became the first person with Down syndrome to earn a full college athletic scholarship.

Shortly after signing, Bockerstette received the opportunity to take the course at the Phoenix Open. Before every shot she would tell herself “I got this.” And she did.

A few months later, after Woodland’s 2019 U.S. Open victory, he called his biggest fan, who he said inspired him to finish strong.

"I used your positive energy, you were awesome."

After the amazing moment in Arizona went viral, “I got this” became more than just a saying to get her mind right and she created The I Got This foundation. It now exists to promote golf instruction and opportunities for people with Down syndrome and other intellectual disabilities to play the game.

In 2020, she returned to the same tournament that started it all and received a check for $25,000 on behalf of her foundation. Alongside Woodland, of course.

Another unforgettable moment on 16 with @AmyGolfsNDances! The entire crowd was decked out in green shirts with Amy’s ‘I Got This' foundation logo. #12Sports #IGotThis pic.twitter.com/2DNHblvmCE

Amazing Amy is just that, amazing. She will compete alongside her teammates next week and the world will be rooting for the inspirational sophomore and the Paradise Valley Pumas.