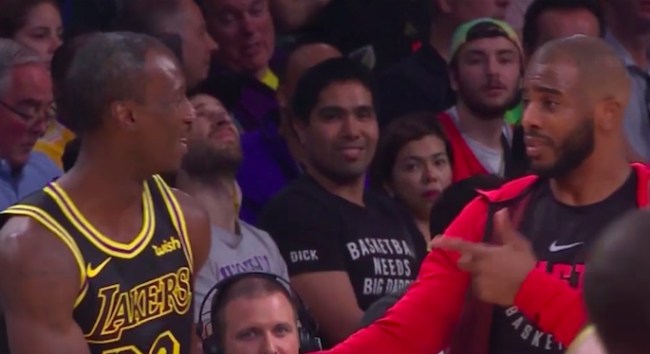 Andre Ingram has been grinding it out in the NBA’s developmental G League since 2007, and the Los Angeles Lakers were nice enough to give us the feel-good story we so desperately need when they finally gave him a chance to play in the big leagues by offering him a contract for the final two games of a disappointing season. He got the call off the bench late in the first quarter in their game against the Houston Rockets (and got some words of encouragement from Chris Paul while checking in) and it’s safe to say that he didn’t disappoint.

Ingram announced his arrival my nailing a three on his first shot attempt in the NBA, but he was just getting started. By the time the game was over, he’d managed to rack up 19 points thanks in no small part to making four of the five shots he took beyond the arc (which shouldn’t have come as much of surprise when you consider he nails 47.5% of shots from deep and hold the record for the most threes in G League history).

House of Highlights created… well… a house of the highlights that resulted in Ingram being on the receiving end of “MVP” chance from the crowd at the Staples Center.

ESPN spoke with Ingram after the game and he revealed that everyone on the team told him to literally shoot his shot at every opportunity— a strategy that apparently paid off (although the Rockets and likely actual MVP James Harden came away with a 105-99 win). He described his surreal experience, saying:

This is great @Lakers pic.twitter.com/CcjH8OD7rO

I’m sure LaVar Ball is thrilled.

The Lakers will wrap up their season tonight, and if they’re looking to mix up their starting lineup, I’m sure Ingram wouldn’t mind stepping in.