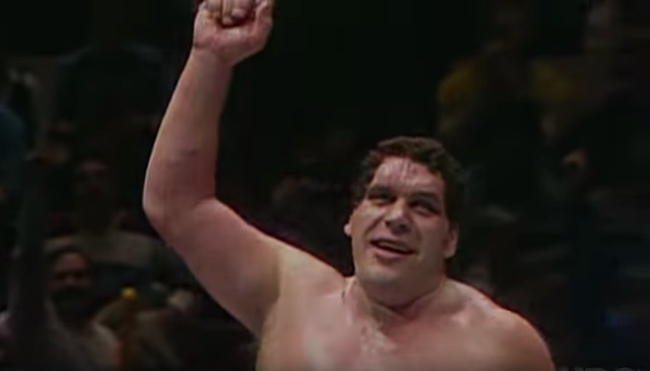 One story that seemed to resonate the best was how Andre ripped farts that were borderline mythical. Truly, the way Hulk Hogan describes the gas passed by Andre the Giant sounds like Home recounting The Iliad and The Odyssey. Everyone reading this has ripped a memorable fart at some point in life but nothing comes close to the gas being passed by Andre the Giant.

Victor Chi of The Post Game reports (there’s also video on their website of Hulk talking about the farts):

“I’ve been in different dressing rooms, like a hockey dressing room where there’d be a wooden bench, and you could put 20 people sitting there,” Hulk Hogan said. “If Andre was to pass some gas, the whole bench would rumble all the way down to the end and vibrate the guy on the end of the bench. He used to think that was quite funny. His placement was very deliberate.”
Cary Elwes who became friends with Andre while shooting the classic film “The Princess Bride.” He independently confirmed the flabbergasting force of Andre’s exhaust.
“One time he passed wind on the set, and it deafened everybody,” Elwes said. “And Rob Reiner said, ‘Are you OK, Andre?’ and he said, ‘I am now.’ He was always quick with a line. He had us all laughing all the time.” Sometimes those laughs came with a price when Andre let one loose. “Oh my God, we all had tinnitus for a week,” Elwes said. (via)

I’ve only ever experienced something close to this at one point in my life. We were driving back to Sarasota from Orlando with two friends and passed out in the back seat after partying the night before. Out of nowhere, I wake up to the most putrid smell imaginable. My cousin who was driving had ripped an atomic fart, locked the windows, and cranked up the heat on full blast to bake that suffocating fart and both I and the dude in the front seat woke up thinking the world was ending.

I can’t even begin to imagine Andre the Giant shaking an entire wooden bench with his gas. The dude was a legend. And I cannot wait to watch the documentary on Tuesday night on HBO Sports.

If you haven’t seen the trailer for the Andre the Giant documentary yet you can watch it here: