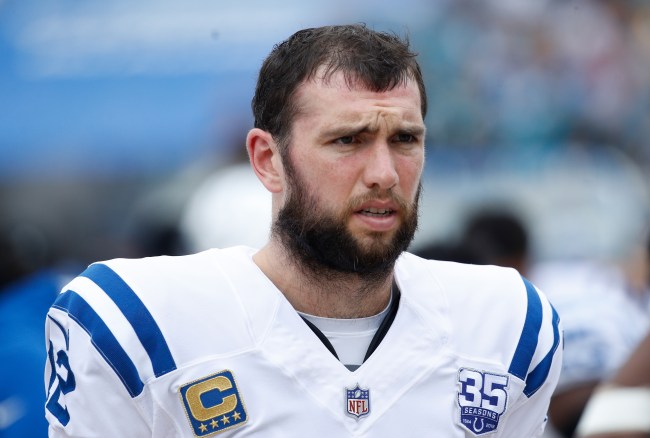 Andrew Luck retiring from the NFL over the weekend shocked everyone. Seriously, had you asked me what had a better chance of happening, winning $500 from a scratch-off lottery ticket or seeing the 29-year-old Luck walk away after winning “Comeback Player of the Year” last season, I would’ve confidently said the former. It’s being debated as the most unbelievable retirement in NFL history; that’s how amazing it was.

As the four-time Pro Bowl quarterback gets set for the next chapter of his life, it was time for a popular Andrew Luck parody account on Twitter to bid farewell as well.

Many of us are familiar with the Capt. Andrew Luck account, which is one of the more humorous ones out there. With nearly 544,000 followers, the anonymous creator acts as the now former football player, creating Civil War-era themed content thanks to the beard Luck often sports. Following the former No. 1 overall pick’s decision to walk away from the NFL, the account posted this funny message.

Dearest mother —
The quill has never felt more heavy. I have made the decision to holster my sidearm permanently. I shall battle no more. The decision is difficult, but, as the hogs taught me, I must be true to myself. I am coming home to care for you and the farm.
— Andrew

But that was only the beginning, because, as Andrew Luck did, the Capt. Andrew Luck Twitter account is now calling it quits as well, posting a perfectly penned final tweet to all the followers.

A heartfelt thank you. And a fond farewell.

Take a look below at the message from the dear Captain as he bids farewell, via SI.com.

I hope this letter finds you all well. Life on the family farm is just as I remembered. I have been up at the crack of dawn each day, sometimes crowing before the rooster. Oh, how he hates to be beaten. The hogs were so happy to see me, they could barely contain themselves in the pin. Dearest mother is in tremendous spirits. She was elated for my final return—all in one piece. She insists I pass along her well-wishes and assure you she fully intends to keep the unit stocked with batches of Squirrel Oil for your upcoming battles.

Oh, the times we had out on our campaigns through the years. I feel as though I was just a youth who hardly had two neckbeard whiskers to rub together when I first unholstered my sidearm. How we have all grown one hard-fought battle after another. From that frozen tundra to face the Horned Barbarians (I recall sleeping in a deer carcass to keep warm) to combating those painted Pirate Ruffians in their land without light. Then there were the Steel Men, who battled in a Pitt. And who could forget the orange Horsemen? Good thing we packed extra air since their land had so little.

Of course, we were hoodwinked by the deserter, McDaniels. But, that was serendipitous as it led to the appointment of the esteemed Gen. Reich.

We broke hardtack (and subsequently teeth) together, shared mother’s homemade goodies, such as spiced raccoon knuckles and sugared skunk thighs, as we stared up at the sky, imagining what it would be like to once and for all reach the great Bowl Valley. I, of course, plan on following your every move in the future, starting with your first battle against the Lightning Men in that formattable land: San Die Go. I will be first in line as soon as the papers are off the press with the latest news of your engagements. And I hope to get letters from time-to-time informing me of your adventures. Finally, I would be remiss if I did not tell you serving along each and every one of you was a joy and honor. We lost battles. We won battles. But we did it all together: one mighty unit.

While true I shall not be on the field with you physically, henceforth my spirit will always take the form of a Colt. And it will be with you as you hopefully make your triumphant march to Bowl Valley.

Allow me to leave you with this: Never have I seen such talent, courage and determination in the eyes of those around me. My resolve was strong because my belief in my unit’s abilities was unwavering.

You soldiers, your unit, is greater than the sum of its parts. Each one of you has the fearlessness, heart and grit to make a difference on the field. Yet, the group working as one wins the battle.

Please, take care of yourselves and one another.

While we don’t know the identity of the Capt. Andrew Luck Twitter account, we do know that, like the real quarterback, he is a deep and fearless leader. Here’s to the captain as he abandons his final journey.