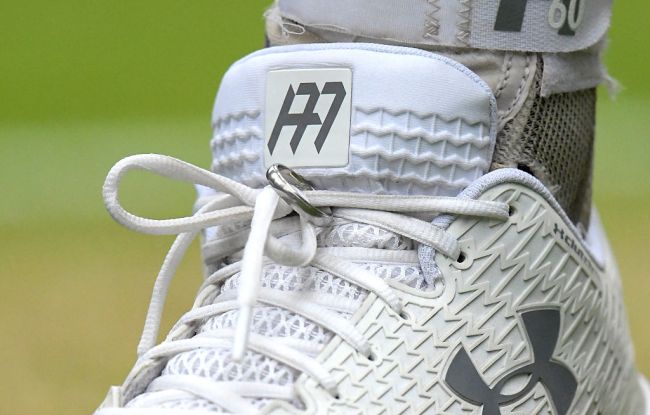 Andy Murray is an idiot and he knows it. The 34-year-old tennis star revealed that he had his tennis shoes stolen while in the Coachella Valley this week.

Although that may not seem like a big deal, Murray can’t play with a wedding ring on his hand during matches. Instead of wearing it on his finger, he ties the band to his laces.

Thus, when the shoes were stolen, as was the ring.

Murray explained that while in California to compete in the Indian Wells tournament this week, he left his “damp, sweaty and smelly” sneakers under his car outside of his hotel. He wanted them to “get some air to them and dry them out overnight.”

The next morning, upon arrival to his car, the sneakers were gone. They had been stolen.

Murray had to buy shoes that were not his normal competition brand at the local pro shop, which was not ideal but could have been worse.

Sure enough, it was. As he was getting ready for practice, Murray’s trainer asked him where his wedding ring was.

It was at that point that he realized he was “an idiot” and a “#clown.”

Hear him tell the full story:

Needless to say, Murray is “in the bad books at home” and is trying to find his ring. He married his wife Kim Sears, with whom he has four kids, in 2015.

She seems lovely, and the two are very happy together, but she isn’t someone you want to piss off. Here she is talking about one of her husband’s opponents back in 2017:

Knowing that he is in the doghouse, Murray is asking his followers for help in his location efforts.

“If anyone can share this or may have any clue where they may be it would be very helpful so I can try and get it back,” he said.

Murray’s match in the Round of 128 is on Friday. He may have had enough time to have a new pair of competition shoes shipped to him, but — barring an unforeseen discovery — he will be without his ring during the match.

The bigger question, perhaps, is whether he will be sleeping on the couch when he gets home.