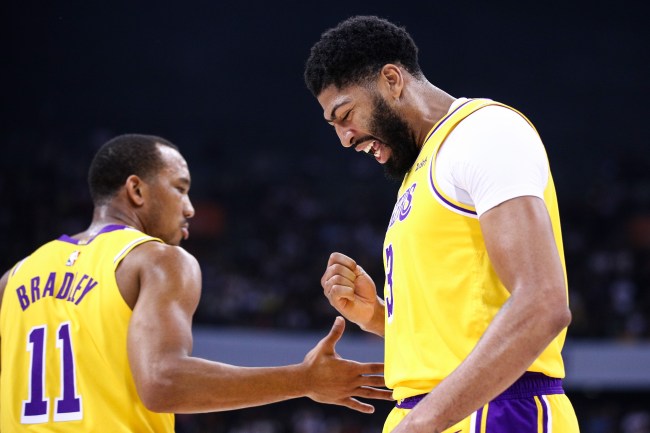 Anthony Davis is one of the many NBA players who has a customized handshake with, seemingly, every single one of his L.A. Lakers teammates, with the guys doing wild, choreographed movements after big plays or wins. It’s become pretty customary in the league over the past few years, and, for fans, some of them are dope to see.

However, with the serious threat of coronavirus these days, everyone’s doing what they can to cut down on contact with each other. That means people staying inside avoiding public places, and using as much hand sanitizer as possible to try and fend of spreading germs. Hell, everyone’s so paranoid about all of this — and rightfully so — that the Golden State Warriors are reportedly even playing a regular season game without any fans, and the Seattle Mariners may play home games at their spring training facility.

The Warriors reportedly will play tomorrow's game against the Nets without fans at Chase Center due to the coronavirus outbreakhttps://t.co/Ukna2gRa8b pic.twitter.com/y9Al9hWPgT

As for Anthony Davis, he’s taking matters into his own hands, quite literally. That’s because, while talking to reporters about the threat of coronavirus on the league and in general, the Lakers All-Star said he’s rethinking his “disgusting,” customized handshake with teammate Avery Bradley. See AD’s reply below.

Anthony Davis said he had a moment where he rethought a high-five routine he does with Avery Bradley where he licks his hand. With the looming threat of COVID-19, he realized: "It's disgusting."

For those unfamiliar with what the handshake looks like, take a peek at the video below to see how the two often engage during games. You’ll get a better understanding of why it’s a smart call to just get rid of it.

Anthony Davis licks his hand then high 5s Avery Bradley who then immediately touches his mouth then both high 5 Bron. #Coronavirus in 6 pic.twitter.com/cmQtdRSmRp

While it may seem harmless, the fact that COVID-19 has everyone freaking the fuck out, it’s probably a good call for Davis and Bradley to cut it out of their routine. And, unlike some of the other handshakes NBA players have together — which are usually the ones mentioned above that are choreographed and just involve some variations of high-fives — this ones includes spit being transferred to one another, which, you know, probably isn’t a good way to prevent germs from spreading.

Every single one of us is concerned about coronavirus, and we’re all on edge about how we can avoid contracting it, spreading it and getting deathly ill from it, so it’s a wise decision for Anthony Davis and Avery Bradley to give this routine up right now.