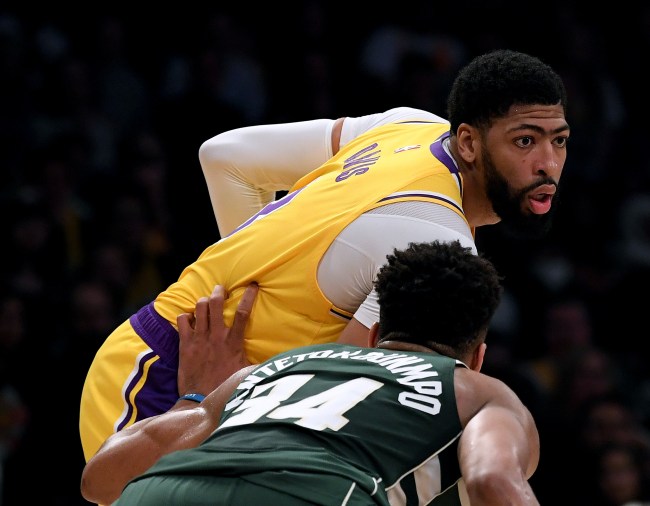 Anthony Davis is one of greatest basketball players on the planet right now, and, if you’re building a team from scratch, is easily in the top-25 current NBA players to choose from — as I recently wrote about. After being traded to the L.A. Lakers last offseason from the New Orleans Pelicans, the seven-time All-Star has elevated his game even more, teaming up with LeBron James to make a double-headed monster capable of winning a title once the NBA season resumes in a month or so.

While things might be great at the moment for Davis and the Lakers, there’s always something lingering in the distance — the business side of things. In this case, it’s the fact that Anthony Davis is set to become a free agent this upcoming offseason, meaning the 27-year-old will be in line for a rich payday from any number of franchises.

Although his first season with the Lakers has been successful thus far, Davis hasn’t exactly pledged allegiance to the organization, having already turned down an extension from the team, while also saying in a months-old interview that he may have interest in returning to his hometown of Chicago at some point. Could it be this offseason?

“If you get a chance to come home and play for the Bulls would you do it?” a young athlete asked Davis in the midst of a Q&A segment of the Nike-sponsored event.

“Honestly, it’s nothing like playing at home,” Davis responded, after the room filled with laughter. “I don’t know. … I mean, I am a free agent next year, but we’ll see. It’s a possibility.”

So if you’re a Lakers fan, don’t get too comfortable seeing Anthony Davis in purple and gold, because he could already be scheming to leave for greener pastures, more money and that home cookin’ sooner rather than later. But it also might not be because that’s what he really wants to do — according to ESPN’s Brian Windhorst.

That’s because, while appearing on ESPN’s Get Up Tuesday morning, Windhorst suggested that Davis could leave the Lakers for a very solid fundamental reason: lack of money. To be more specific, the longtime reporter detailed how the current state of the league because of the pandemic could absolutely ravage the salary cap, making it nearly impossible for players like Anthony Davis and reigning league MVP Giannis Antetokounmpo to return to their current teams.

"It may not make economic sense for Giannis to extend. And this could even also apply to the Lakers and Anthony Davis."@WindhorstESPN on the financial ramifications COVID-19 could have on free agency. pic.twitter.com/6sS8JJSZ08

“The reason the supermax was put into the NBA was for this exact reason — to offer superstars so much money they don’t want to leave. It’s had mixed success. The problem however is we don’t know what the salary cap is going to look like next year,” Windhorst said. “And even if the Bucks went 16-0 through the playoffs, if the salary cap collapses, it may not make economic sense for Giannis to extend. And this could also even apply to Lakers and Anthony Davis. Anthony Davis could be smiling from ear-to-ear, so happy to be in LA. But it may not behoove him to sign a long-term contract this summer. The results on the floor obviously matter, but the negotiations with the CBA and what happens with the salary cap may matter more about whether these guys resign this summer.”

Windhorst, who was specifically speaking about the supermax — which is put in place for NBA teams to offer the most money to star players in order to keep them in free agency — may be less this offseason because of lost revenue league-wide. It means Davis could find himself on the outside looking in considering his contract demands, while a guy like Antetokounmpo would also find his market value lower in a potential extension.

Some NBA executives fear the cap could fall by $25-30 million next season, per ESPN’s Adrian Wojnarowski, which would limit a team’s ability to pair All-Stars together — as the Lakers have with Anthony Davis and LeBron James.

There are already tons of rumors about both Giannis and Davis floating around, and, should the NBA salary cap collapse as much as Windhorst believes it could because of the pandemic, it makes for an even more interesting offseason that could lead to superstars again swapping teams and hunting for the most money. This is definitely something to keep an eye on in the coming months.