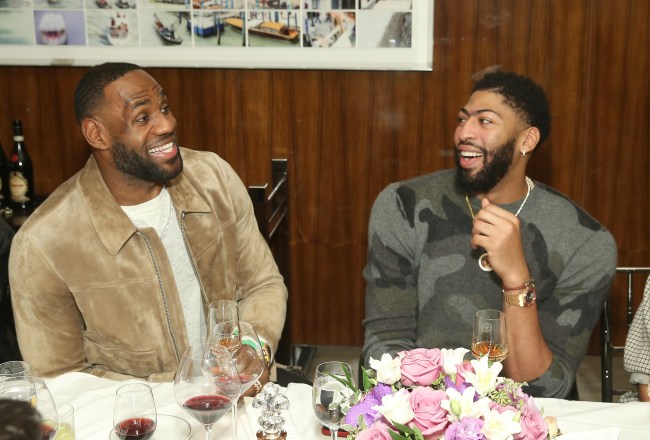 Stop me if you’ve heard this before but the Lakers are the best team in the world, LeBron only can’t be considered a human highlight reel because he’s an alien, and Anthony Davis could win any and all individual awards this season. Oh, and the Knicks still suck.

We’re a week removed from a game in which the Lakers scored 142 points, Davis scoring 50 of them, and LeBron pouring in a quiet 32 points to pair nicely with 13 assists. I hadn’t even sprouted my first pube when LeBron first entered the league. Remarkable.

Heading into a must-watch matchup against the fellow 24-4 Milwaukee Bucks on Thursday night (8 ET), Anthony Davis spoke with Complex about how his teammate continues to be the greatest physical specimen on earth despite doing it for 17 years.

What’s been the biggest revelation about playing with LeBron that you maybe didn’t see coming?
I think it was just his IQ. I mean, obviously, we know how much of a student of the game LeBron is, but just being on the same team with him, how much he studies the game and how much he knows the game, how much of a leader he is. You hear about it, but until you’re able to play alongside him, you really get a feel for it. And realize how great of a leader and great of a player he is.

For all you visual learners out there, here is a depiction of LeBron’s insane IQ:

LeBron with the CRAZY pass to Dwight 🤯🔥#LakeShow pic.twitter.com/KXDRfbNZDi

What do you marvel most about him? Is it the passing? Is it the way that he keeps himself in incredible shape at age 35? Is it the motivation?
The way he takes care of his body. I mean every practice, game, shootaround, walk-through, he makes sure he’s recovering and getting ready for the next game, practice, shootaround, whatever. So you don’t know those things if you’re not on the team with him.. I mean you hear about it, you’ve spent this amount of money on strong recovery and treatment and you know, he does this, he does that. But until you get in the same room with him and realize what he do as to make sure that his body is in tip top shape and ready to go for a next game, it’s unbelievable the things he do. And so I’m definitely a big fan of that and trying to take as much as I can from that. And so I can also follow in the footsteps of playing X amount of years in this league and still be able to perform at a higher level like year 17.

Nobody has marveled over LeBron’s transcendent preparation more than Kevin Love. Like most of us, dude is just in awe. I love this clip.