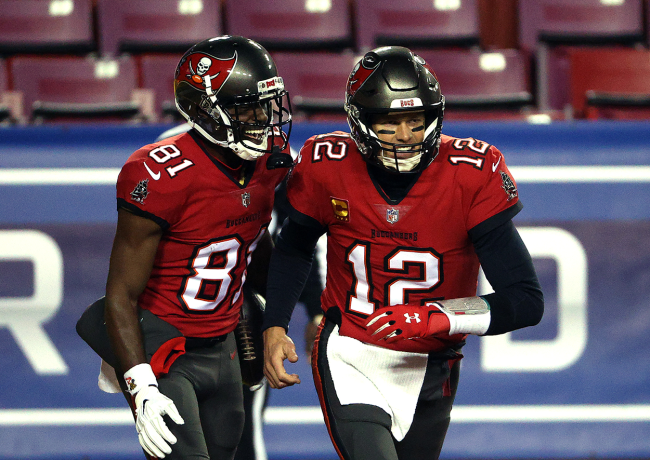 As the Tampa Bay Buccaneers wrap up their fourth week of training camp, Tom Brady is not currently with the team. The 45-year-old is taking an extended leave of absence and will not be back until after August 20th.

The time away from training camp is unprecedented, even for the oldest active player in the NFL who has seven Super Bowl rings. It comes on the heels of reports that Brady has looked “miserable” during training camp and it sent NFL fans into a frenzy.

It also caused Antonio Brown to speak out. The 34-year-old wide receiver, who has not played a down in the NFL since his bizarre outburst in January, called out Tampa Bay for the double standard it has created by allowing Brady to take time off.

Now u see the difference

Put that Shit on

To translate, Brown is saying that he finds it interesting (or funny) that Tom Brady has such a hold on the Buccaneers and the NFL that he can take 10 days off in the middle of training camp due to “personal reasons.” He hopes that people can see the difference with how Tampa Bay treated him and his mental health versus how they treat Brady and his need to get his mind right. And then he closed by promoting his new song and dance.

Back in January, Brown spoke out about his mental health and made it very clear that he is not mentally unstable and has never been diagnosed as such. A few days later, he claimed that the Buccaneers offered him $200,000 to check himself into the “crazy house” so that the team would have better optics. Brown also said that he was considering suing Tampa Bay over false claims about his mental health.

Now, seven months later, the team is allowing Brady to step away from the team for more than a week just to get himself right. Brown wants you to see the difference.

He also took shots right at Brady’s personal trainer and health guru and believes that justice has not been served.

Alex Guerra You think i won't have u smacked at TB12 boy stop playing with me ! Boy getting paid by bucks n taking players money too

still no justice for the Real