Antonio Brown Walks Back Previous Comments On Tom Brady, Tries To Save Face With New Perspective 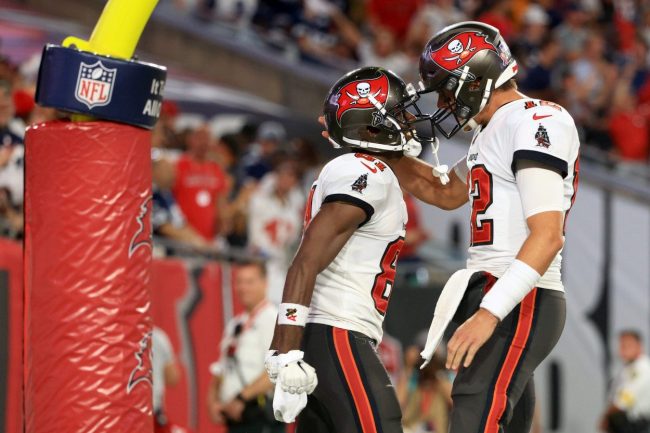 Tom Brady has been nothing but good to Antonio Brown. And yet, after bizarrely stripping down and quitting the Buccaneers mid-game, Brown was quick to throw his former quarterback under the bus during his first public appearance.

Now, just over a week after making some very scathing comments about Brady, Brown is walking them back and trying to save face.

This whole thing began back when Tampa Bay first signed Brown. After spending some time together in New England, the Buccaneers brought Brown to Florida.

Without anywhere to stay, Brady let Brown sleep at his house until he was able to get a permanent living situation locked down. Since then, and even before then, Brady was nothing but gracious to Brown and always defended him despite his often unusual and rash behaviors.

That was the case again after Brown’s most recent, and most outlandish meltdown. The 33-year-old wide receiver got into it with the coaching staff on the sideline (there is a lot of “he said, she said” about what really happened), stripped off his pads, helmet and shirt, ran off of the field mid-game and quit.

A lot has unfolded since then, and you can find all things Antonio Brown HERE.

However, the focus here is on Brown’s relationship with Brady.

After the incident occurred, Brady was quick to ask empathy for Brown. He doubled down on the understanding and support later in the week and preached the importance of mental health.

And then, after some time passed for things to settle, Brady put a lot of what was happening into perspective. His response was a bit of a non-answer, but it was also true.

One day later, Brown spoke out on what happened for the first time and couldn’t keep Brady, someone who had defended and helped him throughout his career, out of his mouth. He had some very polarizing comments about his former quarterback, who just so happens to be the greatest of all-time.

Now he is walking them back.

“Listen, I love Tom. That’s my guy. Don’t get it twisted. A lot of words were taken out of substance,” Brown said. “Tom is one of my true friends in the midst of adversity that was there for me, so don’t get it twisted about nothing with Tom Brady.”

Although his comments may not have been the most intelligent, because he probably meant “out of context,” Brown made it very clear that he has new perspective on Brady. His conversation with TMZ was a complete 180 from his initial comments.