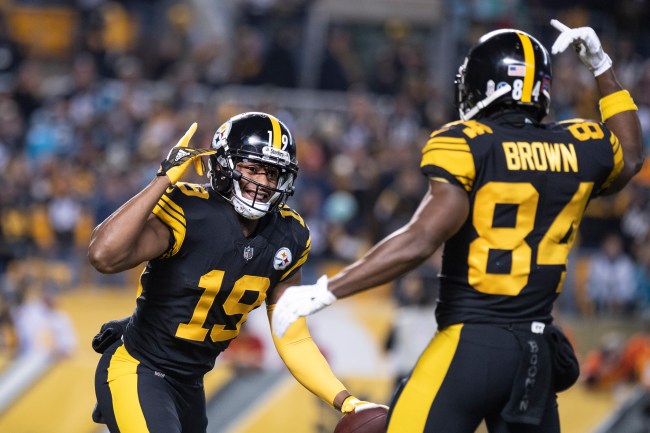 Imagine how radioactive you have to be to be just one year removed from scoring a career-high 15 touchdowns on 1,300 yards receiving and are now struggling to make a coed intramural flag football team.

It would be impossible for a reasonable person not to feel such an overwhelming sense of shame that he is forced into some deep introspection that hopefully leads to a shred of humility.

Antonio Brown is incapable of feeling humiliation. Which is why he is sitting at home on the floor because he threw all his furniture off the balcony, and belittling players who haven’t fucked themselves out of a job.

Imagine thinking this is a good tweet. Or even that you should be the one to tweet it.

The obvious implication here is that AB believes the Raiders will get rid of Derek Carr this offseason, thus he won’t be moving with them to Vegas.

The 500 is referring to the disappointing receiving yard total from JuJu Smith-Schuster this season (552 yards in 12 games). The “learn some Respect” part is likely alluding to JuJu saying in the summer that he was ready to take the number 1 receiver spot.

Tough season all around this year. 2020 will be different. Thank you to everyone who has continued to believe in me and support this team through the struggles this season. pic.twitter.com/OJRnymoL1k

Do you know how I know there’s no God? Because a team will sign Antonio Brown this offseason and he’ll have 1,200+ receiving yards and nine touchdowns and never learn a goddamn thing.