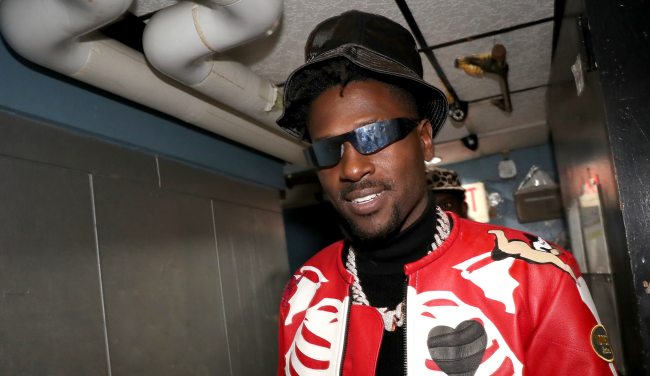 Antonio Brown had a significantly better Sunday than his former team, the Tampa Bay Buccaneers, did. At least that is how it looks on a couple of videos from inside Miami’s XXIII Club.

Following the Bucs’ heartbreaking loss to the Los Angeles Rams, and his subsequent trolling of them, AB reportedly rolled up to Club XXIII in a silver Rolls Royce to host the club’s “Any Given Sunday” party.

Page Six reported that Brown, draped in fur, “was joined by an attractive brunette and drank Casamigos till 3:30 in the morning.”

During the night’s festivities, Moneybagg Yo performed and a DJ played Antonio Brown’s new song, “Pit Not the Palace” – reportedly per Brown’s own request.

“He’s picked up a few tricks from his new music mentor Kanye West,” a source said.

TMZ also reported that Antonio Brown dropped around $15,000 on bottles while he was at the club.

Check out some video from inside the club below.

AB went clubbing as soon as the Bucs got eliminated 😂😂😂 pic.twitter.com/rUPCLqmm4w

The previous weekend’s “Any Given Sunday” party at the XXIII Club was hosted by 50 Cent and saw celebrities like Fetty Wap, Busta Rhymes, Cuba Gooding Jr. and DJ Whoo Kid in attendance.

Antonio Brown also recently went on the I Am Athlete podcast and said there is one quarterback in the NFL that he would like to play with, if he ever gets another chance.

Seems unlikely, but, hey, stranger things have certainly happened in the NFL.