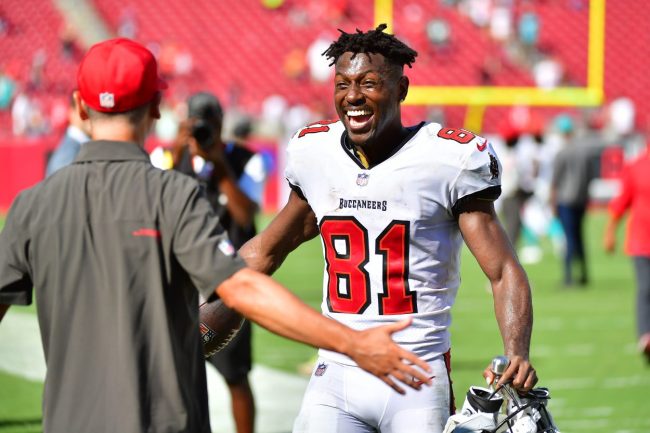 Antonio Brown and the Tampa Bay Buccaneers did not leave things on good terms. On January 2nd, the controversial wide receiver proceeded to take off his pads, helmet and shirt during the game and left the field.

Since then, a lot of back and forth has taken place between Brown and the organization. The 33-year-old pass-catcher claims that the team forced him to play through an injury, but head coach Bruce Arians and the team pushed back on that idea.

Tampa Bay also claimed that Brown asked for his $2 million in incentives to be guaranteed prior to the game that included his strange exit. On the other side, Brown’s attorney went on a wild Twitter rant about how the team mistreated his client.

Meanwhile, Brown was all over the place. He was seen partying with Kanye West and Madonna, among others, released some new rap songs, partied in the club, and was allegedly sleeping with an Instagram model who once licked a toilet seat for clout.

You can find all of the updates about Brown’s unusual month HERE.

In addition to his appearances and all of the weird stories about him, Brown admitted he may have taken things too far and backtracked on his comments after disparaging his friend and former teammate Tom Brady. Needless to say, it is one of the craziest sagas — if not the craziest saga — in NFL history.

It received a new twist on Sunday.

After the Buccaneers lost to the Rams, Brown trolled the team on Twitter. A meme was created from Brown’s exit that shows him shirtless in the end zone on his way into the locker room.

Somebody added a blank white sign between his hands and it has been used with all kinds of different messages. On Sunday, Brown posted the meme with a sign that said “BUCS ELIMINATED.”

For Brown to celebrate his former team’s loss is just another crazy twist to what has been a weird, wild journey in the NFL.