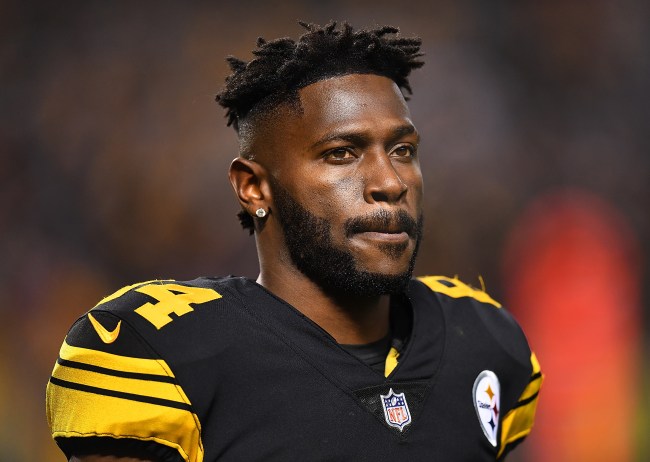 The Antonio Brown and Pittsburgh Steelers drama finally seems to have ended. That’s because, following a meeting with team ownership, the disgruntled All-Pro wide receiver tweeted out some of the details that came when the two sides got together, saying that both have agreed that it’s time to move on.

Brown, who has publicly trashed the Steelers over the past few months since he missed a Week 17 must-win game against the Cincinnati Bengals, took to Twitter to announce that, while he and the team did clear some of the air around the drama of the past few months and he’ll always respect the Rooney family, it’s time for the next chapter. Take a look at the quick message below.

Had a great meeting with Mr.Rooney today we discussed a lot of things and we cleared the air on several issues! We both agreed that it is time to move on but I’ll always have appreciation and gratitude towards the Rooney family and @steelers organization! #CallGod #Boomin pic.twitter.com/DEgURchvhW

This is just about the worst kept secret in sports, as everyone and their mother knew that, at some point this offseason, Antonio Brown would be traded from the Pittsburgh Steelers. From Brown trolling head coach Mike Tomlin, to him allegedly liking social media mentions of quarterback Ben Roethlisberger’s past sexual assault allegations, there was no way in hell the team would have been able to sweep everything under the rug and be fine together. Still, at the very least, it’s at least good to see that the two sides did meet and that, in the end, the break-up was mutually agreed upon, and Brown didn’t go out completely trashing the organization that he’s seen so much success with.

As for what’s to come, only time will tell. Antonio Brown has publicly campaigned for a trade to the San Francisco 49ers in the time that he’s been feuding with the Steelers — even posting an image of him wearing a Niners uniform on Instagram — but the franchise will do whatever’s best for them in terms of reward. More recently, Brown answered some questions with fans on Twitter to try and explain all that’s gone on, so here’s some of what he had to say.

No conflict just a matter of respect! Mutual respect! He has a owner mentality like he can call out anybody including coaches. Players know but they can’t say anything about it otherwise they meal ticket gone. It’s a dirty game within a game. #truth https://t.co/MsSyBVd3Ny

Not for the money its for the love of the sport ! The commitment to win relentlessly consistently passionately ! Plus I made 70 million it’s public record not to be cocky just truth! Time to play for my own Team AB84 the family ! https://t.co/v4vFO2QCSf

Love Steelers Nation everything to my heart ❤️ no more ! https://t.co/uWwi5mB3R3

After the coach tell the team I quit while nursing some bumps then invite me to watch the show with same guys thinking I quit i can not stand with that! I’m the bad guy doe we miss post season think about it https://t.co/imrJ8jnnBc

While Antonio Brown’s next team is TBD, he did say in recent days that he’s looking for some “guaranteed money” from his next destination, per ESPN:

“If your squad out there want to win and your squad want a hungry wide receiver who’s the best in the whole world, someone hit my phone,” Brown said into his phone camera while working on an elliptical. “Tell them I ain’t doing no unguarantees. I ain’t even gonna play myself no more for this NFL, you heard.”

“I think I done done everything. What y’all think? What’s left for me to do?” Brown said. “Win a Super Bowl? Hey, gotta be the right team for that, right? Who wants smoke? I’ve got a lot of fuel built up. When this fuel turns to smoke, hope you’re in shape, hope you’re ready to go the distance. I’m telling you, I’m ready to go 36 rounds, like a heavyweight, ya heard.”

“If your team got guaranteed money, tell them call me. AB can’t do no more unguarantees. So we clear. I want ya’ll to be clear and understand something. This is not a game, people. This is not for show; this is not to be cool. This is strictly to inspire you that no one can determine your destination but you.”

At least the drama’s over between Antonio Brown and the Steelers, though, and they can both turn the page and move onto the next chapter.