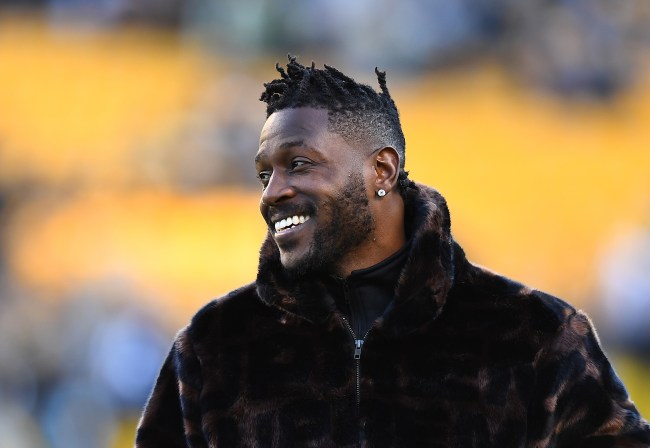 The drama between Antonio Brown and the Pittsburgh Steelers just continues to be must-see news, with the All-Pro receiver trolling the only organization he’s ever played for last week by posting a picture with the franchise’s owner, Dan Rooney, who made comments about the future between the team and Brown by saying it’s “hard to envision” the two sides smoothing things over. The wideout then took things a step further by removing the Steelers from his Twitter bio, which had previously mentioned them. To say that things just keep getting uglier and uglier is an understatement.

Well, now Jerry Rice, the greatest receiver of all-time who made his mark playing for the San Francisco 49ers, is throwing more logs onto the fire, because he went as far as saying that Antonio Brown has told him that he wants to join the Niners “really bad,” per 95.7 The Game’s podcast “Joe, Lo & Dibs”. Here’s what Rice had to tell the hosts about Brown’s apparent interest in joining San Fran.

“This guy, man, he’s a totally, complete team player,” Rice continued. “I don’t know what happened in Pittsburgh but I know that this guy, if he comes here to San Francisco, he’s going to do everything possible to help this team to win.”

Rice said the blockbuster move for Brown would not only provide the 49ers with the linchpin in burgeoning offense, but would also be perfect from an imaging perspective.

“It sends a message to the fans, that, ‘Hey, look, we’re not looking down the road to win. We’re looking to win right now,’” Rice explained. “And, he’s that type of player. Big playmaker that can make those big plays and really put a lot of fans in the stands.”

Then Joe asked the money question.

Joe: Do you get the sense that he would like to play for the 49ers?

“He’s talking about running the hill with me —  doing all that and just working out and just picking my brain. I don’t know if it’s going to happen because it’s going to be up to Kyle Shanahan and also John Lynch, but I’m all for it if they want him to come on board.”

“And I’m looking forward —  I would be looking forward to just passing some of that knowledge on to him and being around this guy because I know he’s a great individual.

Although speculative, Jerry Rice’s claims seem to be lining up with Antonio Brown’s communication with the all-time great, as he was posting updates on his Instagram story showing that he was FaceTiming with the Hall of Famer recently, per Twitter.

Just a FaceTime between The GOAT and Antonio Brown:

Who knows if this happens or not, but if it’s the Niners that Antonio Brown wants to play for, there’s nobody better than Jerry Rice to be in your corner as an influence to help. The fact that Brown is interested in joining a team that just went 4-12 this season from a franchise like the Steelers shows just how much he wants to get the hell out of Pittsburgh, if you ask me.