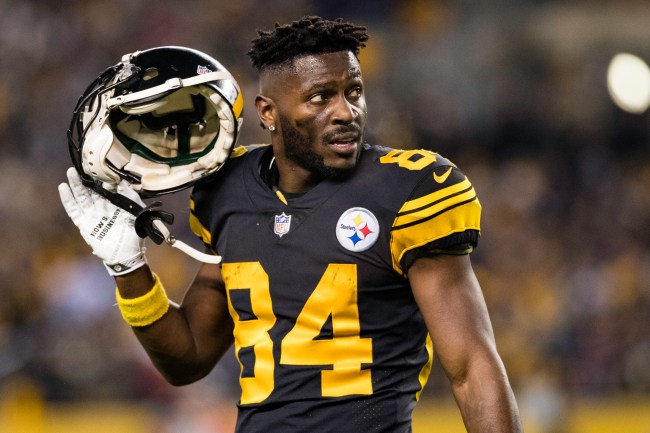 Last week, Brown made a big fuss about wearing his preferred and even threatened to retire if the NFL didn’t allow him to wear it.

The crux of the issue is that Brown’s helmet is over 10 years old and cannot be certified under the league’s current helmet policy.

Antonio Brown's helmet model was discontinued by the manufacturer and his actual helmet is not approved by the national governing body because it is more than 10 years old. He filed a grievance against the NFL for not being permitted to wear it under league rules.

Per a league source:  NOCSAE won’t recertify AB's helmet because it is more than 10 years old. 11 helmet models were prohibited in April 2018 and their grace period has expired this year. the helmet Brown wants to wear is not one of them. An arbiteator heard AB's case today

An arbitrator has already ruled against Brown in his case against the NFL but his team has found a loophole that would allow him to wear his preferred helmet next season.

PFT has confirmed with a source close to the situation that the NFL, the Raiders and Brown’s representatives have been in contact, and that the NFL has approved Brown wearing the helmet model he wants — the Schutt AiR Advantage — if he finds a helmet that fits him and is less than 10 years old.

Schutt stopped making the AiR Advantage in 2011, and Brown’s helmet is more than 10 years old. But there are AiR Advantage helmets out there that are eight or nine years old, and if Brown can find one that fits him properly and is in good condition, the league will let him wear it, the source said.

Right now, the source said, Brown and his representatives have not found an AiR Advantage helmet that is less than 10 years old. But they’re hoping to. Anyone who has one may be able to get a pretty penny from Brown for it.

"I'm looking for a Schutt Air Advantage Adult Large Helmet that was manufactured in 2010 or after. In exchange I will trade a signed practice worn @Raiders helmet."

Fans were not impressed by Brown’s reward.

Dude you better be prepared to pay six figures for this hat. You kinda tipped your hand about how important this is to you. And about how much money you have.

This ain't a baseball card, AB. Gotta up the ante. Maybe a signed Bentley and season tickets.

Im holding out for a few mill if you do not find another 1. You are at my mercy 😂😂

You’re about to make 30 million, and all I get is a smelly practice jersey that you got for free, and wrote your name on it?

bruh is that all you will give someone……. LMFAO u should be giving them 50K for all the fuss ur more diva than KIM K

A signed sweaty practice shirt? For the helmet you're looking for to play the game you say you love, plus getting paid millions and only a sweaty shirt? Bruhhhhh….. what's next? Trade ya my dirty training socks for your pacifier? Smh