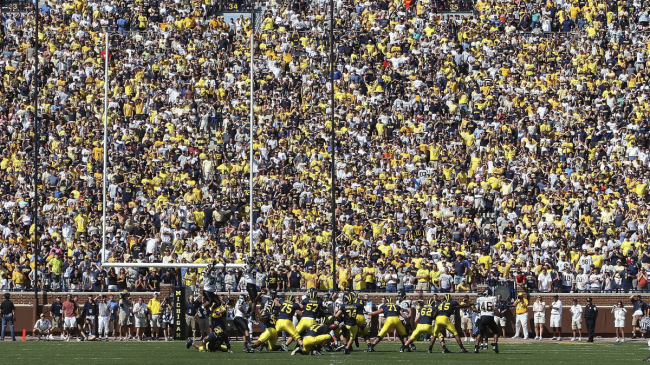 The Appalachian State Mountaineers are making headlines again this week, but this time for the wrong reasons.

The program was trending one week ago following a major upset of a top 10 team in Texas A&M. They then followed it up with an incredible Hail Mary victory on Saturday against Troy with the College GameDay crew in attendance.

But a forgettable moment from that walk-off win is now making its rounds on social media.

While attempting to honor a former star player, the Appalachian State marketing team made an embarrassing gaffe.

Corey Lynch played for App St between 2003 and 2007. In his time on campus, the safety helped the Mountaineers win three FCS National Championships, being named a 3x All-American on defense.

Lynch finished his playing career with 358 tackles, and he owns the FCS record for passes defended with 52. Despite all the accolades, he’s maybe most famously known for his blocked field goal in the Big House against Michigan that sealed an upset of the fifth-ranked Wolverines in 2007.

He buoyed that successful college career into a five-year stint at the professional level, playing for the Bucs, Bengals, Chargers, Titans, and Colts.

Lynch is a legend among lifelong App St fans, but the Mountaineers in the media room must’ve forgotten.

While attempting to honor the safety, the marketing team posted a graphic of former NFL defender John Lynch. Oops!

Now, the mistake is understandable to an extent. Both players wore No. 47, though Corey Lynch never donned the number in Tampa. Both played the same position, and obviously, they have the same last name. A quick image search with Lynch + Bucs probably pops out John Lynch in 99% of cases.

But you’d think you’d get the image right when honoring one of the most impactful players in program history.

The gaffe is now garnering quite the reaction on Twitter.

One person wrote, “Unbelievable. EMBARRASSING for App St, this is not Corey Lynch. He never wore #47 at the Tampa Bay Buccaneers. This is John Lynch.”

This fan posted, “Whoever runs your scoreboard programming, tell them that’s John Lynch, not your 3x time All American Corey Lynch. Horrible, you don’t even know your own guy.”

Brutal mistake by the Mountaineers.