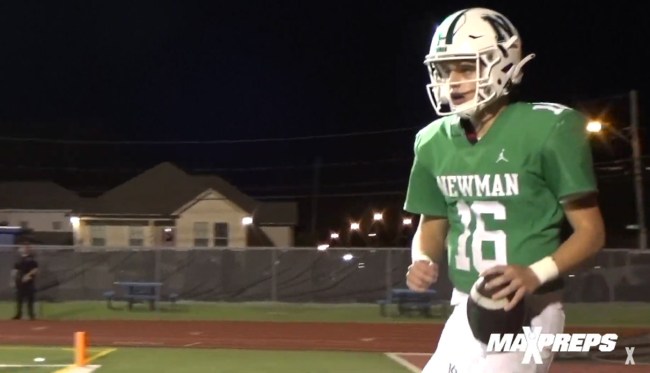 When it comes to high school football prospects, no name is bigger than Arch Manning. Sure, the quarterback from the Isidore Newman School in New Orleans is still just about to enter his junior year, but he’s already shown why he’s more than worthy of having that famous last name. As the No. 1 ranked pro-style quarterback in the Class of 2023, per 247Sports, many see the teen as the next great passer from the famous Manning family.

But, let’s be real here, just because he’s got the lineage and the tutelage and the DNA of guys like Archie Manning, Peyton Manning, Eli Manning and his dad, Cooper Manning, doesn’t necessarily mean he’s going to be the best quarterback ever seen. Hell, he may not even be the best of the aforementioned bunch — but the pressure’s on for Arch to become a legend by the time he reaches college.

After a recent video showed Arch throwing a 45-yard bomb at a Clemson camp over the weekend, even more people are salivating over the high school prospect.

Given the fact that nobody knows how Arch Manning’s football career might go, ESPN’s getting nailed by folks on Twitter over a recent segment on Get Up where analysts debated whether this kid, all 16 years of him, would become the greatest Manning yet. Take a look below at what some people had to say when seeing the topic of conversation focused on a high schooler.

Ummm, this topic may be premature. Just maybe. pic.twitter.com/n7AUBw1EGH

Nothing like putting unrealistic expectations on a kid who is still in high school.

1) this is insane
2) Cooper getting the last laugh through his son would be goddamn GLORIOUS https://t.co/GLXj1mqBWi

Please. Let the kid just develop. He's years away from being worthy of the "be better than Peyton, Eli, or Archie" talk

Look, this is what sports debate shows are all about these days, right? A bunch of loud-mouthed guys arguing about the most viral video and turning it into a segment for 10 minutes. Unfortunately, Arch Manning isn’t a college or pro athlete yet, so even thinking that he could become a better player than grandpa Archie, uncles Peyton and Eli or dad Cooper is just a ridiculous waste of time. Nobody knows where this kid is going to college, let alone if he’ll reach the NFL one day.

Arch has all the tools to develop into a great passer, has the whole DNA thing working in his favor, and has gotten coaching from the best to ever do it. But let’s all pump the brakes on whether he should already be fitted for a gold jacket in Canton just yet.